Long view of the demolition of the West Stands. (Photo by Patricia Frechette)

Work is well under way to replace the 91-year-old West Stands of Memorial Field with an improved and accessible seating structure for the historic football and track stadium. Plans call for preservation of the ivy-covered, brick façade, but an otherwise complete overhaul. 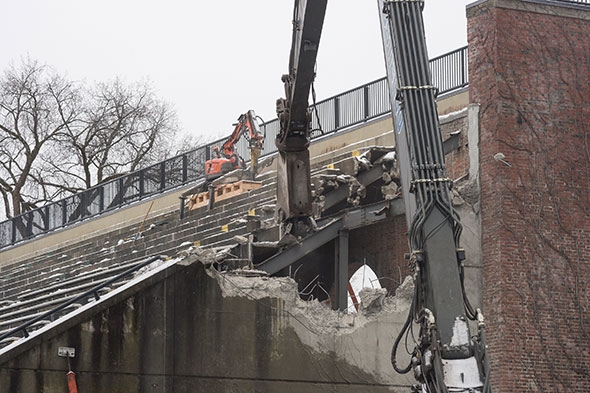 “This project will complete the transformation of Memorial Field into a modern, comfortable stadium while preserving its most historic elements,” says Bob Ceplikas ’78, deputy director of athletics. (Photo by Eli Burakian ’00)

The Board of Trustees approved the project at its March 8, 2014 meeting.

The renovated stands will feature wider aisles and concourses, handrails, modern rest rooms, a premium chair-back section on the 50-yard line, and accessible seating on three levels connected by an elevator. The new press box will also be accessible by elevator, and will include upgraded technology for video streaming, television and radio broadcasts, and video scoreboard operation. Construction will be completed prior to the start of the 2015 football season. 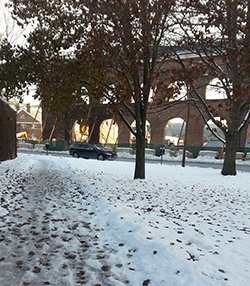 Morning sun streams behind the arched openings of the West Stands’ facade. (Photo by Patricia Frechette)

“This project will complete the transformation of Memorial Field into a modern, comfortable stadium while preserving its most historic elements,” says Bob Ceplikas ’78, deputy director of athletics. “When we add the new West Stands to all the other upgrades completed since 2006—Floren Varsity House, the new East Stands, FieldTurf playing surface, lighting, sound system, and video scoreboard—we will have significantly enhanced the whole experience for fans and student-athletes alike.”

All the new changes, he says, will “take our stadium from one of the most tired, outdated facilities in the Ivy League to one of the most advanced, with a game atmosphere that is hard to beat.”