Dartmouth’s Ryan Hickox and an international team of astrophysics colleagues have discovered an unusual phenomenon in a galaxy far, far away—more than 5 billion light-years away; and a long time ago—almost halfway back in space-time to the Big Bang. 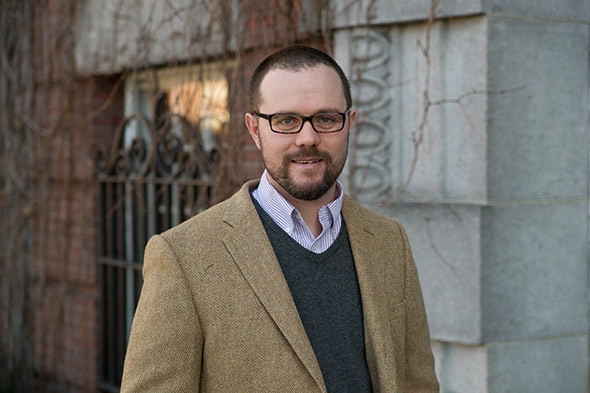 They found a massive, starburst (star-forming) galaxy blasting out a stream of cold, dense molecular gas—the raw material from which stars are built—effectively removing this resource and shutting down any further star formation.

“This is the first time to our knowledge that anybody has ever seen this in anything like a system like this,” says Hickox, an assistant professor of physics and astronomy. “Nobody has ever seen it in a big galaxy like this one, where the galaxy is blasting itself to bits.”

He suggests that this may show a transitional phase between star-forming galaxies and passive galaxies like the great elliptical galaxies that don’t form any stars at all.

Their findings were reported Dec. 4 in Nature.

While the scientists were observing this distant starburst galaxy, an extraordinary distribution of its star forming molecular gas caught their attention. They saw a large stream of the gas moving away from the galactic center and out of the galaxy. Initially, they thought they were seeing the results of a blast from a quasar, the light source powered by a central black hole, producing a large amount of energy in a small space—enough to launch this material at very large velocities.

Employing ground-based and orbiting telescopes—the Hubble Space Telescope, the Chandra X-ray Observatory, the WISE infrared space observatory, and the IRAM Plateau de Bure microwave telescope in the French Alps—they sampled a broad spectrum of radiation frequencies produced by the galaxy, but these investigations revealed no evidence of forces from a central source. 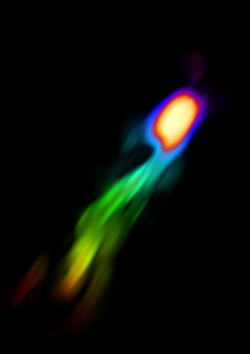 From the IRAM observatory in the French Alps, this microwave image shows the bright spot indicating gas associated with the dense, compact star-forming galactic nucleus. The “tail” highlights the gas being ejected from the galaxy. (J. Geach and R. Crain)

Hickox and his colleagues concluded that they were witnessing a stellar feedback mechanism in operation. “When the galaxies start to form stars in a really dense region, they start blowing this stuff out. They reach what appears to be a maximum density and that is the limit,” he says. “We seem to be observing this limit being set.”

The dense region in the galaxy, where the star formation initially took place and then abruptly ceased, is near the center of the system, and this has implications for galaxy formation in general.

“It is possible that most massive galaxies undergo a phase like this, whereby their most dense central regions are produced, but these occurrences are rare enough, short-lived enough that you don’t see it happen very often,” says Hickox. “An evolutionary snapshot is how we are looking at it—getting a chance with these rare systems to see it happening.”