The number of students applying to Dartmouth is on the rise, up more than 6 percent over last year. The Admissions Office has received just under 20,500 applications for acceptance into the Class of 2019. 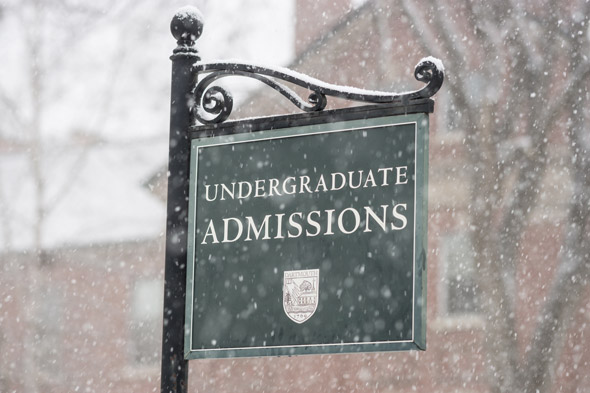 The Admissions staff is in the process of reviewing regular decision applications. (Photo by Eli Burakian ’00)

The increase in applications announced today by Dean of Admissions and Financial Aid Maria Laskaris ’84 builds on the jump this fall of more than 10 percent in the number of students who designated Dartmouth as their first-choice college. In December, the College accepted 483 early decision students from a highly competitive pool of more than 1,800.

“This overall applicant pool comprises a strong cohort of prospective students for the Class of 2019, for both their academic and extracurricular accomplishments, and for the diversity of their backgrounds,” Laskaris says.

The Admissions staff has begun the process of reviewing regular decision applications and will communicate decisions to candidates on March 31.

Provost Carolyn Dever, in her first year at the College, says she looks forward to welcoming the incoming class.

“I’m thrilled to be at Dartmouth for what I believe is a pivotal moment of positive change, and I look forward to greeting an exceptional Class of 2019 as we define the future of this great liberal arts institution together,” she says.

The increase in applications represents a turnaround from last year, when the College received 19,296, or 14 percent fewer applications than in 2013. Despite the drop in the number of applicants for the Class of 2018, last year’s pool was Dartmouth’s fourth-largest number of applications and followed several years of rapid increases. Dartmouth also saw an increase last year of more than 4 percent in its yield—the number of accepted students who chose to come to Dartmouth—and an unexpectedly large incoming class numbering 1,152 students.

“We have focused our efforts on really highlighting Dartmouth’s strengths—exceptional faculty who are committed to teaching, the range of experience and backgrounds of our students, and our commitment to experiential learning and to the success of Dartmouth students after graduation,” Laskaris says.

In addition, Admissions outreach to students who are the first in their families to go to college highlights the level of academic support and advising available to students at the College.

“Dartmouth’s First Year Student Enrichment Program (FYSEP) is a real success story, underscoring the commitment we make to ensure the academic and personal success of our students, particularly those who are first generation college students,” says Laskaris.

The College also remains committed to a need-based financial aid program that guarantees meeting 100 percent of eligible students’ demonstrated need for all four years, Laskaris says. Students from families with incomes below $100,000 receive free tuition, and loans are not packaged in their financial aid awards. For students who do borrow, the average total indebtedness at graduation is $16,339, approximately half the national average.