By the time President Phil Hanlon ’77 walked onto the stage of The Moore Theater at 8:30 a.m. today, the room was filled to capacity with students, faculty, and staff waiting to hear the details of his Moving Dartmouth Forward initiative. 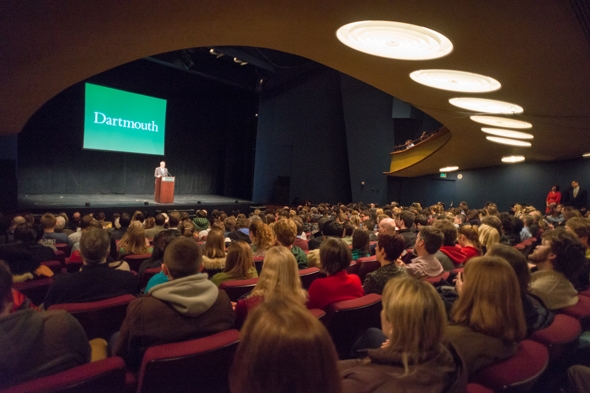 Community members fill The Moore Theater and an overflow room in nearby Alumni Hall to listen to President Phil Hanlon ’77. (Photo by Eli Burakian ’00)

Nearly 800 members of the Dartmouth community packed Moore, the theater’s balcony, and an overflow room in nearby Alumni Hall to hear President Hanlon lay out his plan to reform and revitalize campus life at Dartmouth. Many more watched the live-streaming broadcast on the College television station, DarTV.

“Everything is possible for Dartmouth. But our aspirations will never be realized if we fail to address a vital component: the environment in which students live and learn,” President Hanlon began, before detailing his multipoint plan for fostering inclusivity, establishing the highest standards of academic achievement, and tackling the problem of extreme behaviors.

Read More About the Plan:

A PDF of the Timeline

The reaction from the crowd was thoughtful and generally supportive. Some said the true test of Hanlon’s vision will be in how it is put into practice.

John R. Thorstensen, a professor of physics and astronomy, said Hanlon’s proposals struck him as carefully considered and well articulated.

“I didn’t think the elimination of the Greek system was really likely, but that there would be major steps to make residential life much more attractive and welcoming to students. That’s what this does. It was a good speech,” said Thorstensen.

After the address, Thorstensen spoke with his colleague Ryan Hickox, a professor of physics and astronomy who served on the Moving Dartmouth Forward Presidential Steering Committee, and the two agreed that Hanlon did a good job of crystalizing the recommendations of the committee report into specific policy proposals. “He’s a smart man,” Thorstensen said.

Hanlon’s plan is built around a new housing model assigning all students to a residential community that will serve as a home base throughout their time at Dartmouth, even if they choose to live in an affinity house, a Greek house, or off campus.

Hanlon also challenged leaders of the Greek system to continue with reforms already begun, such as eliminating pledge terms and barring first-year students from Greek houses for the first six weeks of the fall term. If progress is not made in the next several years, Dartmouth will revisit the Greek system’s continuation on campus, according to the plan.

Other reforms include the elimination of hard alcohol from campus; a four-year mandatory sexual violence prevention and education program for students; an increased presence of faculty and other mature influences in the lives of students; a comprehensive code of conduct for all students; and increasing academic rigor and opportunities for learning outside the classroom.

“These initiatives will help pave the way to a campus that is safer and free of extreme behaviors. But true and lasting change will not come from top-down policies alone,” Hanlon said. “It will come from individuals—and organizations—committing to live up to a higher standard of behavior.”

Michael McDavid ’15, a member of the Beta Alpha Omega fraternity, said he was glad Hanlon stated clearly that he does not believe the elimination of fraternities is the solution to problems of extreme behavior.

“I appreciated that specificity. I think that needed to be addressed, and I was impressed that he did,” McDavid said. He added that he was not sure what Hanlon meant when he said student groups would be held accountable for bad actions. “I signed the code of conduct—I’m not sure what he meant by a higher standard. Isn’t the standard there? I don’t know what that is going to be.”

McDavid also expressed mixed feelings about the elimination of hard alcohol on campus. “It’s hard not to see it as a bit invasive, especially as a 21-year-old student who lives on campus and enjoys hard alcohol,” McDavid said. “That being said, I recognize that it probably will do good, especially being eliminated from Greek houses.”

The crowd applauded when Hanlon thanked Moving Dartmouth Forward committee members and Chair Barbara Will, the A. and R. Newbury Professor of English, for their work since April gathering community opinion and researching policies at other institutions. The committee turned its report over to Hanlon last week.

As he talked about increasing academic rigor, Hanlon drew a laugh when he mentioned the early start time for his address: “Just think students, instead of listening to me, in the future you could be in class,” he said.

Speaking from a podium on a dark stage with only a green Dartmouth backdrop, Hanlon invoked the memory of President John Kemeny, who came to Dartmouth to build a world-class mathematics department, was a pioneer of the computer age with the development of the BASIC programming language, and as president, guided Dartmouth’s transition to coeducation.

“Like Kemeny, we must recognize a moment in time when change is necessary to reach our potential,” said Hanlon, who studied under Kemeny as a Dartmouth undergraduate. “Now is such a moment.”

Sitting in the audience was Ralph Manuel ’58. The dean of the College under Kemeny, Manuel said he heard echoes of his former boss in Hanlon’s plan.

”Kemeny would be very pleased. I hear so much of Kemeny in him: Here’s a problem. Here are the considerations. Here are solutions. It is the mathematician’s thought process."