A former top environmental affairs official in the Obama administration who took a leading role in international climate change diplomacy will join a number of classes, consult with scholars at the Institute of Arctic Studies, and deliver a Great Issues lecture this week as a visiting scholar at the John Sloan Dickey Center for International Understanding. 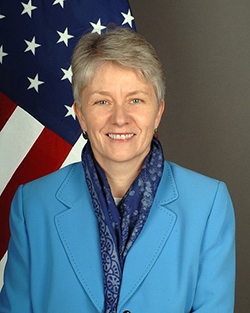 Kerri-Ann Jones will deliver a Great Issues lecture this week as a visiting scholar at the John Sloan Dickey Center for International Understanding. (Photo courtesy of U.S. Department of State)

Kerri-Ann Jones, assistant secretary of state for oceans and international environmental and scientific affairs from 2009 to 2014, will hold a public lecture on “Negotiating for the Planet: Environmental & Climate Change Diplomacy” from 4:30 to 6 p.m. on Tuesday, Jan. 13, in Filene Auditorium.

Daniel Benjamin, the Norman E. McCulloch Jr. Director of the Dickey Center, worked with Jones in both the Obama and Clinton administrations. He will introduce her remarks and moderate questions.

During her weeklong Dartmouth residency through the Dickey Center, Jones will join in a number of classroom discussions, including Assistant Professor of Environmental Studies D.G. Webster’s “Global Environmental Politics” class, and Professor of Engineering Mary Albert’s “Climate Change and Engineering” class. Albert is also executive director of the U.S. Ice Drilling Program Office.

Jones will also meet a number of postdoctoral fellows and PhD candidates, as well as Dartmouth faculty involved in public policy and environmental science. She will also sit down for an interview with students who write for the journal World Outlook. Her first meeting at Dartmouth on Monday was with Ross Virginia, director of the Dickey Center’s Institute of Arctic Studies, who was recently selected by the U.S. State Department as one of two distinguished scholar leaders of the Fulbright Arctic Initiative. Virginia is the Myers Family Professor of Environmental Science and a professor of environmental studies.

Jones holds a PhD in molecular biophysics and biochemistry from Yale University, has worked for the U.S. Agency for International Development, and was an associate director in the White House Office of Science and Technology Policy under President Clinton.

Benjamin says there has been tremendous scholarly interest in Jones’ perspective on global climate policy.

“I’ve been astonished by the interest we’ve seen,” he says. “She’s been invited to guest lecture in at least five courses and will be meeting with an extraordinary range of faculty, undergraduates and graduate students. In my view, that’s strong proof of the campus-wide interest in the broad areas of climate and science diplomacy.”