Read the full story by Kevin Nance, published in the January/February 2015 issue of Dartmouth Alumni Magazine.

Giving the Commencement address on the Green in 2009, novelist Louise Erdrich ’76 was in crowd-pleasing form. With a buoyant voice and a radiant smile cutting through the mist of that drizzly day, she told funny stories, starting with what turned out to be an allegory about some baby chickens being transported in the back of the small plane that first brought her to Dartmouth. Every time the plane hit an air pocket, the chicks went peep-peep-peep-peep-peep—courageously raising their voices against a worrisomely turbulent world. 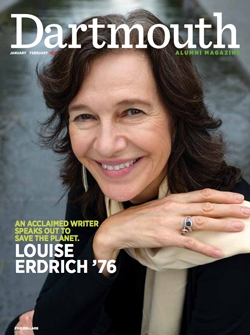 Louise Erdrich ’76 won a 2012 National Book Award for her novel “The Round House.” (Courtesy of Dartmouth Alumni Magazine)

But near the end of her 15-minute talk Erdrich’s own voice darkened. So did her metaphors. “Knowledge without compassion is dead knowledge,” she said, her smile replaced by an expression of grim purpose. “Beware of knowledge without love. I don’t mean Harlequin Romance love. I don’t write those kinds of books. I mean love as in devotion to this world—a world that needs you right now, worse than it ever has.” She assessed the crowd with a gimlet eye. “Have you ever been in a relationship where you took someone for granted, but he or she seemed resilient? A relationship in which you had the feeling that things were going to be all right in spite of how you’d acted, and then, all of a sudden, boom—you got dumped? That’s the relationship we’re in right now with the Earth. But if the Earth dumps us, we all do die of broken hearts.”

It was a discordant note on that day of hope and optimism: a bit raw, a bit uncomfortable. But the students, and the College itself, may have gotten off easy. In the three and a half years since, Erdrich—whose 14 novels include her first, Love Medicine (1984), which won the National Book Critics Circle Award, and her most recent, The Round House (2012), which won the National Book Award—has become increasingly alarmed about our souring relationship with the Earth and the looming prospect of an ultimate breakup.