Failure to Launch? Blame the Weather

The road traveled by those engaged in scientific pursuits is often bumpy, fraught with obstacles, delays, and detours. Ask Jim LaBelle, an experimental space plasma physicist at Dartmouth. In late November, the NASA rocket carrying his payload failed to launch. 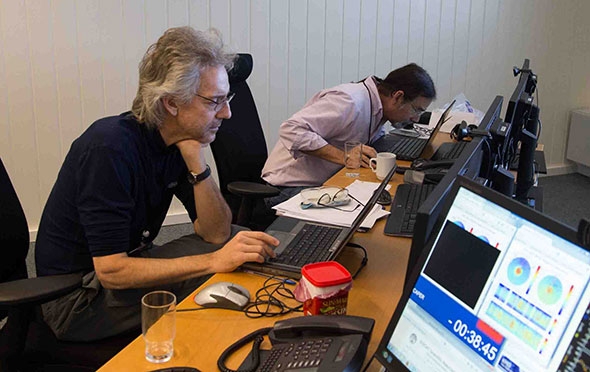 “This was an important undertaking in basic science, one from which we could learn more about ‘space weather’—the solar wind and particle rain that can adversely affect our orbiting communication and GPS navigation satellites, and even endanger them in some cases,” says LaBelle, the Lois L. Rodgers Professor of Physics and Astronomy and the department chair.

He recently embarked on a Dartmouth-led collaborative project with NASA and two other universities—the University of Iowa and the University of Oslo—to study the transport and acceleration of particles through an opening, or cusp, in the Earth’s magnetic field.

“The idea is to try to predict the weather out in space, the same way we do on the ground,” explains LaBelle. “Our spacecraft sit in a zone frequented by very energetic particles, away from the cusp region, but the acceleration mechanisms are comparable.”

The experimental instruments were to ride aboard a NASA rocket in November, traveling through the aurora borealis. However, in what was considered not a failure but a temporary setback due to weather, the launch did not happen. While disappointed, the good-natured LaBelle took it in stride, resigned to the vagaries of his science. 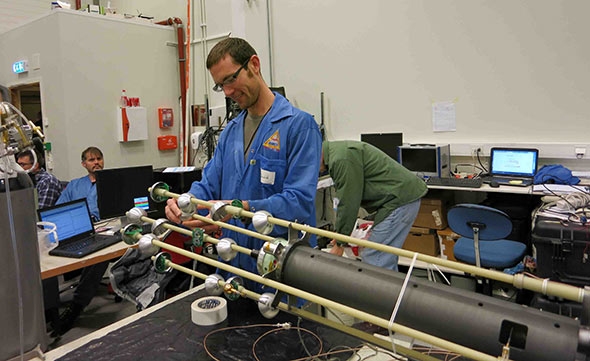 Weeks before the intended launch, he’d been cautious about the prospects. “Not only do we have to have the right scientific conditions, but there are also strict conditions on launch due to the local weather and the winds,” says LaBelle. “It is a real challenge to do these kinds of experiments. Often when you have the science finally in place, the winds are wrong and you can’t launch. It can be very frustrating.”

He recalled what he’d said as he stood on the frozen Norwegian ground in November at the only feasible site for the launch: “We may have to wait as long as two to three weeks to get the launch.” But no amount of waiting—first for the right weather in November and then again in December—yielded the window they needed.

LaBelle says Norway is the best place for a launch because its latitude and distance from the magnetic North Pole offer better views of the aurora borealis, specifically in November and December. The aurora serves as a target for a rocket aimed at the cusp. However, Norway’s weather can be challenging.

“This is a relatively rare occurrence, though it has happened before,” he says. “Due to weather or other constraints it may not be possible to get the rocket off in the defined time for which we have clearances and permissions to launch it.”

Undaunted by the setback, LaBelle is looking toward the future. “The plan is to try again to launch it next year,” he says. “The details are completely up in the air at this point; could be next November, could be December. “

Kristina Lynch, another Dartmouth experimental plasma physicist, is involved as co-investigator on a planned launch in November 2015, and LaBelle says it may be possible to combine their missions.