Here’s how to sign up for Dartmouth’s first open online course, “Introduction to Environmental Science.”

On a quiet day in mid-December, a group of nearly 20 faculty, students, and staff filed into the Dartmouth Center for the Advancement of Learning (DCAL) to conduct an experiment.

Tables were pushed together café-style. Laptops were plugged in and assurances given that lunch would soon arrive. Headphones dangled half in, half out of ears as instructions were announced. Soon, a productive hush overtook the room, save for the click of fingers on keyboards and the whispers of support staff helping stragglers log on. Participants became engrossed in videos, readings, and test questions about soil composition, the origins of an alga known as rock snot, and sources of renewable energy. A group spreadsheet began to fill with comments on technical bugs and user experiences. Lunch arrived. 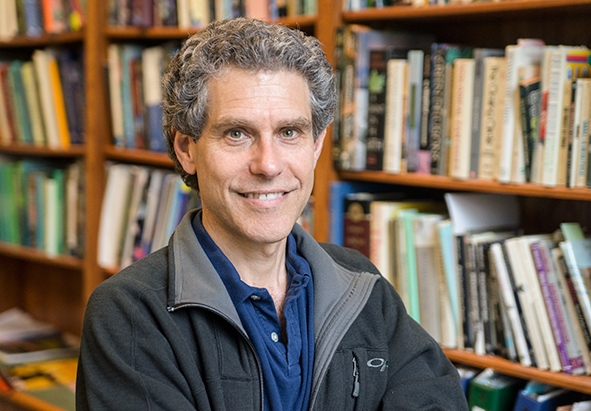 The event: a user test—a month and a half before the Feb. 3 launch date—of the first-ever DartmouthX massive open online course, or MOOC: “Introduction to Environmental Science,” taught by Andrew Friedland, the Richard and Jane Pearl Professor in Environmental Studies.

Friedland’s course, which is not for credit, is the first of four initial DartmouthX offerings the College will roll out in 2015 through its new partnership with edX, announced last year. (Thayer School of Engineering Associate Professor Vicki May’s engineering of structural forms course opens for enrollment later this month, and the others—an introduction to opera, taught by Professor Steve Swayne, chair of the music department, and literature of the American Renaissance, with Don Pease, the Ted and Helen Geisel Third Century Professor in the Humanities, and James “Jed” Dobson, a lecturer in writing—are in production.)

Friedland and a core team of videographers, instructional designers, library staff, and undergraduate and graduate student assistants have been working toward this self-imposed user test deadline since the summer. “We’re calling this a study hall,” says Mike Goudzwaard, the project’s lead instructional designer. “We thought it would be valuable to have people who have been curious about this project give us a fresh perspective.” They borrowed the study hall concept from edX, Goudzwaard says.

“It’s going great,” says Friedland, who has taught introductory environmental science, “ENVS 2,” for over 25 years. “We were worried—do things follow logically, does it work the way we want? Instead people are mentioning small things. They are getting the big picture.”

To date, some 4,500 students from more than 150 countries have signed up for Friedland’s course, and enrollment is still open. These students, from a variety of educational backgrounds, will experience the content in many different settings. Goudzwaard notes the challenge of developing a course for a multitude. “Some may be catching a video in the morning while they’re getting ready for work, or popping into a discussion board at lunch at their desk.” And some, he says, may meet up to engage with the material together in settings similar to the study hall in DCAL.

Josh Kim, Dartmouth’s director of digital learning programs, says, “The College is not judging success in the DartmouthX projects by enrollments, but by how much the experience of creating online curricula brings back to teaching and learning at Dartmouth. By this measure, the process has already yielded invaluable dividends.”

For Friedland—who admits to having expressed skepticism about the MOOC format in the course proposal he submitted to the Provost’s office last spring—the lack of immediate feedback has been a challenging component of the project. “When I’m giving a lecture, I’m constantly looking around the room. In this case, we have been working since July with almost zero feedback, until today.”

But he says the experience of adapting the course for an online audience has already affected his classroom teaching. Before, he says, he followed a traditional lecture model. This past fall, with MOOC production under way, he taught “ENVS 2” again. “This time, I presented information in different media, including video, and let students break into groups and talk about ideas and come back with solutions.”

The more interactive approach worked well, he says. “My fall 2014 class had higher attendance, the students seemed to have higher levels of engagement, and they got the concepts quite well. I was really pleased.”

Friedland has more plans to incorporate his MOOC experience into his teaching. “The next time I teach my intro course at Dartmouth, I’ll have permanent links to segments from the online course that students will watch before class, so that in class I can lecture at a higher level and we can have a discussion at a higher level.”

Emily Lacroix ’15, a chemistry major modified with environmental studies, was working on her senior thesis research in Friedland’s lab over the summer when he invited her to join the DartmouthX team. “I feel lucky to be an undergrad working on this,” she says. “For me, thinking about grad school, I like thinking about logical ways to present information so people learn. And I now know the content inside and out.”

One of Lacroix’s projects is helping to develop an online form of an energy audit in which students will analyze their personal energy footprints. A paper worksheet of the audit has been a staple of Friedland’s lecture class, but may be replaced with this online version.

Ellen Irwin ’14, who majored in biology and minored in history, was a teaching assistant for “ENVS 2” this fall when Friedland asked her to join the DartmouthX project. “It’s made me think about effective teaching methods—how to condense a whole class into its essential elements, and how to convey that in an interesting way,” she says.

Mike Murray, associate director of Dartmouth’s Media Production Group and the lead videographer for “Introduction to Environmental Science,” says Friedland has adapted well to being on camera and using a teleprompter. The team has filmed Friedland at a variety of locations, including the Dartmouth power plant, local farms, and nearby forests. Murray recalls an early shoot on a windy day. “Stuff was blowing all over, and Andy was like, ‘I can’t believe how calm you guys are.’ But you just have to be, because they’re the ones in front of the lens.”

Two and a half hours into the study hall at DCAL, participants were still engaged—noting typos, broken links, misleading phrasing, and browser problems, among other issues large and small.

About the big picture, the verdict was overwhelmingly positive. As she left, one postdoc made a point of saying to Friedland, “Thank you. I learned stuff.”