‘Poseidon and the Sea’ Comes to the Hood Museum of Art

This winter the Hood Museum of Art will showcase the first major American museum exhibition to focus on the ancient Greek god Poseidon and his relationship to the sea. The show will illuminate how ancient societies in the Mediterranean world worshipped the powerful mythological god, who wielded immense authority through his dominion over the sea as well as over horses and other natural phenomena. Included are ancient vases decorated with scenes that demonstrate the worship of the god—known as Nethuns to the Etruscans and Neptune to Romans—and aspects of daily life across the ancient Mediterranean. The exhibition will be on view from Jan. 17 through March 15. 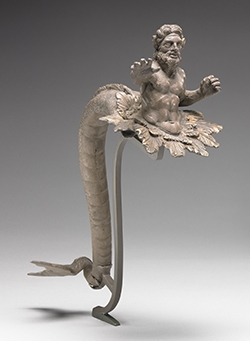 Greek, Macedonian, or Illyrian, handle in the shape of triton, about 100–50 BCE, silver and gold. (The Paul J. Getty Museum, Villa Collection, Malibu, California; 85.AM.163)

“Poseidon and the Sea” was curated by Dartmouth alumnus Seth Pevnick ’99. He is the Richard E. Perry Curator of Greek and Roman Art at the Tampa Museum of Art, as well as a former intern at the Hood.

Pevnick was inspired to organize the show by the nearly life-sized marble statue of the god from the Tampa museum’s collection, which presides over the entrance to the exhibition. He has edited a richly illustrated catalogue, with essays by several leading scholars, which accompanies the show. He will give an introductory lecture at the Hood on Friday, Jan. 30, followed the next day by a half-day symposium.

“It is very gratifying and deeply meaningful for the Hood Museum of Art to be able to present this magnificent exhibition that has been curated by a former Dartmouth classics major and noted art historian and scholar of ancient art,” says Michael Taylor, the director of the Hood. “The Poseidon exhibition brings the teaching mission of the museum full circle, with this former student and Hood intern bringing his expertise back to campus for the benefit of current students interested in the art of the ancient Mediterranean. We hope that this opportunity might inspire future Dartmouth-educated curators of ancient art.”

“I will always remain grateful to Dartmouth and the Hood Museum for providing me with the opportunity, as an undergraduate, to work directly with antiquities. It was there that I took my first steps towards a museum career, and it is truly gratifying now to help bring an antiquities exhibition there,” says Pevnick. “ ‘Poseidon and the Sea’ has been well received in Tampa and at the Joslyn Art Museum in Omaha, and I look forward to seeing the installation in Hanover, where we will be able to incorporate a highlight from the Hood’s permanent collection.”

The works of art and material culture in the exhibition date to between 800 B.C.E. and 400 C.E., and were created by ancient Greek, Etruscan, and Roman artists and artisans. They include striking black-figure and red-figure pottery; sculptures in terracotta, marble, and precious metals; and examples of ancient glass, mosaics, carved gems, and coins, all providing a rich picture of life in the ancient world. 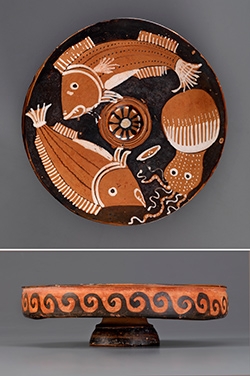 Featuring more than 110 works from major public and private collections in the United States and Europe, “Poseidon and the Sea”examines not only the myth of Poseidon and his place among the gods but also a range of religious cults and votive objects. It also focuses on the myriad ways in which daily life in the ancient Mediterranean world was tied to the sea.

Instantly recognizable by his trident and accompanied by fish and dolphins, Poseidon is characterized by his sturdy build, thick, wavy hair, and full beard. He looms large in Greek mythology as a central figure in the battle between the Olympian gods that brought order to the world and the monstrous race of giants that threatened to overthrow them and create havoc. His most famous sanctuary was at Isthmia, where the Peloponnesus joins the Greek mainland, but he was also worshipped at landlocked sanctuaries. Votive offerings—from a small bronze horse, to schools of fish made of lead, to representations of the god himself—were meant to illuminate and impress. The exhibition also includes a monumental bronze trident from the J. Paul Getty Museum in California. The trident is more than a dozen feet long and is believed to have accompanied a colossal statue of the god that is now lost.

Beyond mythology and religion, however, the sea was the center of daily life in towns and cities along the coast of the Mediterranean. It provided food and other resources, and allowed for easy travel and trade. Allusions to the sea are found throughout ancient art, from cargo boats and warships to dolphins, fish, and octopi. Visitors to the exhibition will discover illustrations of fishermen and shipbuilders alongside fish hooks and ship models, blurring the line between art and artifact, bringing the world of antiquity to life, and offering an intimate look at the timeless beauty and wonder of the sea that continue to resonate with us in the present day.

This exhibition was organized by the Tampa Museum of Art. Its presentation at the Hood was supported by Claire Foerster and Daniel S. Bernstein, Class of 1987, and the Eleanor Smith Fund, the Evelyn A. J. Hall Fund, and the Marie-Louise and Samuel R. Rosenthal Fund.