This year’s Martin Luther King Jr. Social Justice awards will be presented on Thursday, Jan. 29, to four individuals and a Dartmouth student group, all of whom have demonstrated a commitment to social justice, peace, civil rights, education, public health, or environmental justice. The honorees will take part in a panel discussion that same day at 4:30 p.m. in the Georgiopoulos Classroom in the Raether Building at the Tuck School of Business. The event is free and open to the public, and will be followed by a reception.

Richard Joseph ’65 is the 2015 winner of the Lester B. Granger ’18 Award for Lifetime Achievement. Joseph, who was a Rhodes Scholar and holds a PhD from Oxford University, is a professor of political science at Northwestern University. A former director of the African Governance program at the Carter Center, Joseph’s work and scholarly research explore democratization, political economy, and international security, and focus on conflict resolution.

The Granger Award is made in honor of Lester B. Granger, Class of 1918, a World War I veteran, a presidentially appointed adviser to the Secretary of the Navy on issues of race, and, for 20 years, the executive director of the Urban League.

Constance Clery, founder and chairwoman emerita of the Clery Center for Security on Campus, is being recognized for Lifetime Achievement, honoring the work done by her and her husband, Howard K. Clery Jr. ’53, to transform awareness and action about campus safety across the country after the 1986 rape and murder of their daughter. Clery’s work led to the passage of campus crime reporting laws at the state and federal level, culminating in the Jeanne Clery Disclosure of Campus Security Policy and Campus Crime Statistics Act.

The 2015 Student Organization Award recipient is CoFIRED, whose work includes advocacy and education about human rights, immigration reform, and equal legal and social treatment of undocumented immigrants both on Dartmouth’s campus and nationwide. CoFIRED has partnered with the Dartmouth administration on several efforts, including, as part of CoFIRED’s “Drop the I-Word” campaign, working with the staff of the Dartmouth College Library to petition the Library of Congress to revise its cataloging subject heading from “illegal aliens” to “undocumented immigrants.” 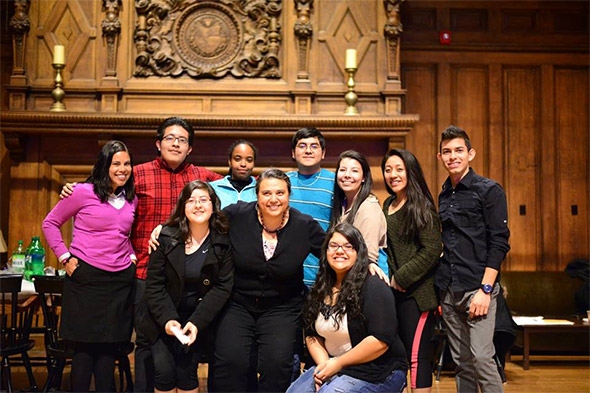 Frank Venegas, Jr., founder, chairman, and CEO of the Ideal Group, will receive the Ongoing Commitment Award in honor of his philanthropy, mentoring, and advocacy within his community. Honoring the legacy of his immigrant grandparents, Venegas has engaged stakeholders in southwest Detroit—corporations, nonprofits, government, and educational institutions—to work together to transform and empower their communities. Venegas is a graduate of the Tuck School’s Minority Business Executive Programs.

Gabrielle Lucke, winner of the Holly Fell Sateia Award, which recognizes a faculty or staff member at Dartmouth who is an enthusiastic and effective leader in advancing diversity and community. Lucke is a senior training and development consultant with the Office of Human Resources at Dartmouth. Over a nearly 30-year career, she has served colleges and universities in many roles, including administrator, faculty member, health educator, and counselor. In the fall of 2014, Gabrielle was elected to the Vermont House of Representatives.

Dartmouth’s Social Justice Awards are sponsored by the Martin Luther King Jr. celebration, the Office of Institutional Diversity & Equity, the Tucker Foundation, and the Geisel School of Medicine.