There are walls all over Belfast, slicing through parks and neighborhoods, still dividing Catholics and Protestants 17 years after the Good Friday Agreement brought an end to “the Troubles.” The stark structures were, to the Dartmouth public policy students who traveled to the region over winter break, a revelation of the lingering divisions in Northern Ireland, says Senior Lecturer Charles Wheelan ’88. 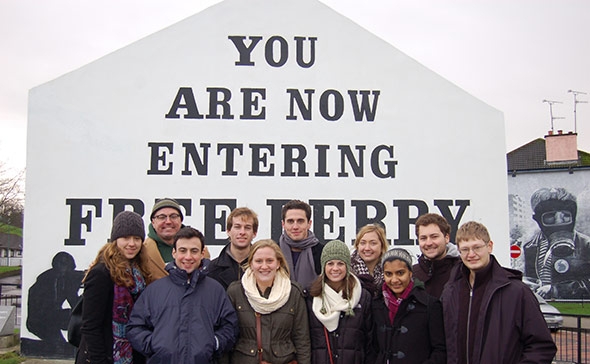 “In Belfast, you would go from one taxi ride where one driver who was a Catholic would say he hates the police and he hates all the institutions that are associated with Unionism, and then you would get into a taxi with a Protestant driver who would give you the exact opposite view,” says Nicholas Zehner ’15, one of the students on the trip.

“The awareness that reconciliation hasn’t come to Northern Ireland was, I think, a surprise to all of us,” he says.

The 12 students in Wheelan’s Global Policy Leadership Practicum, offered through the Nelson A. Rockefeller Center for Public Policy and the Social Sciences, spent the fall term studying the political history of Northern Ireland and the period of violent sectarian conflict beginning in the 1970s and known as “the Troubles.”

During the break following fall term, the class traveled to London, Dublin, and Belfast, meeting with dozens of people who were involved in the conflict, in peace negotiations, or in efforts to rebuild civil society after the conflict. Over two weeks in December, the group met the former prime minister of Ireland, community activists, scholars, business leaders, British military veterans, former partisans from the Irish Republican Army and Unionist militias, and a fair number of outspoken cab drivers.

The objective of the practicum is for the group to collaborate on a policy paper that applies the lessons of the 1998 Northern Ireland peace process to other sectarian conflicts. Wheelan, a senior lecturer and policy fellow at the Rockefeller Center, required that the recommendations, directed to a hypothetical group of senior government officials, be as specific and actionable as possible. 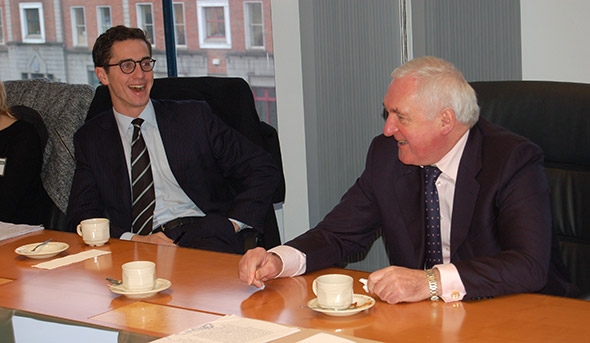 Wheelan’s method is to pose a public policy problem and ask students to produce a practical proposal for addressing it by interviewing experts in the field.

“I particularly like the idea of having a memo, deliverable, that you’ve got to produce,” he says. “It makes it a more active experience as opposed to, ‘gee, here’s a famous person. I’m going to sit here passively and then go home when I’m done listening.’ ”

Armed with a semester’s worth of Irish political history and the question of how to apply the lessons of the Northern Ireland peace agreement to sectarian conflicts around the world, Wheelan’s students met with experts and players across Britain, Ireland, and Northern Ireland, revising their draft memo as they went.

“It’s really incredible how it helps so much to actually go there and talk to people in order to learn about the issues,” says Heather Szilagyi ’15, a government major with a minor in geography.

Bertie Ahern, the former prime minister of the Republic of Ireland and one of the negotiators of the Good Friday Agreement, welcomed the Dartmouth students for a long visit in his Dublin office.

“We had read about him in books and seen his name mentioned many, many times, but when we actually met with him, it just all made so much more sense,” says Szilagyi.

“He was a true politician in the good sense of the word,” says Wheelan, “and just a very funny storyteller.”

Ahern told about researching topics for casual conversation with David Trimble, the leader of the Protestant Ulster Unionist Party in the peace negotiations who later became the first minister of Northern Ireland. A big sports fan himself, Ahern learned that Trimble hated sports. He was encouraged to hear that Trimble was a music lover until he found it was opera or nothing for the Unionist. Ahern said that, in the end, he made the ultimate sacrifice for peace and studied up on opera.

The students were updating their memo on the fly as they gained new perspective from the whirlwind of meetings, says Zehner, who was a student co-editor of the group memo with Sasha Dudding ’15. In the final days of the trip, during the visit to Belfast, the students realized that the peace accord in Northern Ireland was not a historical event, but an ongoing process, Zehner says.

Zehner probably came into the project with more background on the conflict in Northern Ireland. He is from London, where “everyone knows about the IRA. Everyone knows the IRA bombed London in the ’80s and ’90s,” he says. But he was as surprised as everyone else in the class to find that bitter divisions between Catholic Republicans and Protestant Unionists remain.

“In London, we think that Northern Ireland is completely peaceful right now, which clearly it is not,” Zehner says. “I don’t think people are aware of how the conflict is ongoing.”

In Belfast, the group found schools, housing, and even public spaces still sharply segregated, says Szilagyi. Today, there are even more “Peace Walls” dividing Catholic and Protestant neighborhoods than there were when the Good Friday Agreement was signed in May 1998, she says.

On cab rides and site tours they met men and women who spoke about participating in bombings and shootings during the Troubles. And they interviewed leaders of civil society groups who are working for reconciliation, many of them also former combatants and victims, says Szilagyi.

“Everyone in Northern Ireland was touched in some way by the Troubles, because it killed 3,665 people and injured thousands more in such a small country,” she says.

It became clear that a tremendous amount of work remains to be done on reconciliation, Wheelan says. “We were all surprised to find that Northern Ireland is frozen in place in many ways. That’s one of the things the students took away—that peace is a first step, and reconciliation is the next. That is, in some ways, a harder and softer process.”

With the memo due before the students got on the plane for home, a frantic revision process began.

“The more we talked to people in Belfast and understood how frustrated people still are, the more we understood how relevant the work after the agreement is,” Szilagyi says. “We didn’t really have a sense of that beforehand. So we felt that we really needed to add it to our memo. We did that pretty last-minute, but it came together.”

It is wrestling with the tension between an academic study of a political question, as well as encountering the “facts on the ground,” that helps students understand the reality of public policy work, Wheelan says.

“I think one of the things that characterize the policy students is they do appreciate the complexity. Certainly I do,” Wheelan says. “It’s a remedy for academic disciplines that are often too neat and tidy. Students who are attracted to public policy tend to like that messiness.”

Zehner, who hopes to pursue a career with the British Foreign Office, called the experience invaluable. “It is exactly the kind of experiential learning which I think Dartmouth needs to be doing, especially in government. It’s just absolutely fascinating.”