Academy of Love: Faculty Take a Look at Valentine’s Day

There’s no denying that Valentine’s Day can be complicated. But not to worry: Dartmouth Now has canvassed faculty from across the divisions—a sociologist, a biologist, and an art historian—to find interdisciplinary answers to the age-old questions of dating, romance, and, of course, the mating habits of reptiles. 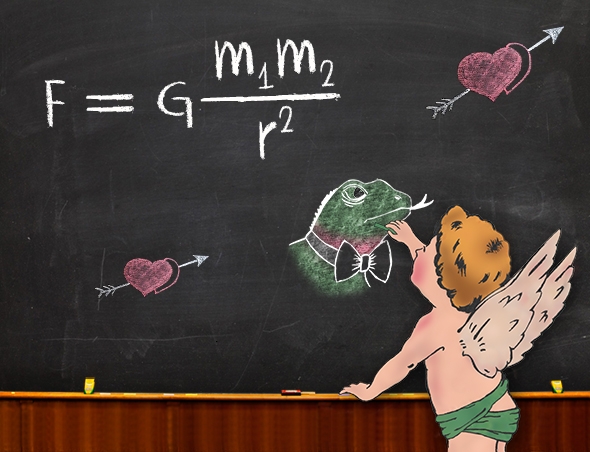 Dating: It’s Not for College Anymore

A couple of Valentine’s Days ago, Kathryn Lively, an associate professor of sociology and chair of the sociology department, was teaching her course on “Love, Dating, Intimacy, and Romance” when she noticed some guys in tuxedos lurking outside her door.

“My husband had sent an a cappella quartet with roses to sing romantic love songs. I could have killed him,” she says. “The students were like, ‘That’s so romantic!’ I totally had to have them deconstruct it.”

She points to a photo of the serenaders on the wall of her Silsby Hall office and admits, “Of course, part of me was completely charmed.” 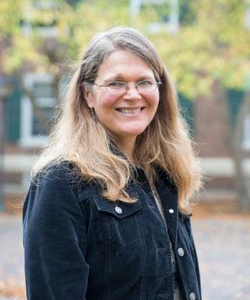 Kathryn Lively is an associate professor of sociology. (Photo by Eli Burakian ’00)

So even for a sociologist, it can be hard to remember that Valentine’s Day is a cultural construction of a time and place. Still, Lively thinks many of us would be happier if we did. “You can accept the Hallmark definition of Valentine’s Day, or you can think about love more broadly—about love for friends, or spending time together, as opposed to getting the perfect gift. Or you can treat it as just a day, and go to the gym.”

For students without a date on Feb. 14, she stresses that it’s not you—it’s college. “No one has a date, because no one dates in college anymore.”

A generation ago, she says, people could expect to find their life partners in college. But these days, with marriages delayed until partners have finished graduate school and established careers, the expectation of finding a long-term relationship by 22 has become unrealistic. And in the so-called hookup culture that is prevalent on modern campuses, she says, men and women often have different goals.

For women, “the process of slut-shaming is alive and well—so women are still more likely than men to want to be in a relationship.” On the other hand, men who might prefer a steady relationship often face ridicule from male peers. “The desires are structured differently.”

“I try not to be too depressing, but most students who take my class decide they’re just going to wait to find love,” Lively says. Her best advice to those seeking long-term romantic partners, she says, is common sense: Know yourself.

Imagine a foreign study program that travels in time—say, to 15th-century Florence, at the height of the Italian Renaissance. Among the stranger sights these students might see, says Adrian Randolph, the Leon E. Williams Professor of Art History and associate dean of the faculty for arts and humanities: “Groups of young men on horseback riding to the windows of their beloveds to break their lances in an expression of love.”

Randolph, who recently co-edited a volume of essays titled Renaissance Love: Eros, Passion, and Friendship in Italian Art around 1500, says the discourse about love in Renaissance Florence was contradictory. “On the one hand marriage, especially among the elite, was a loveless market where brides were exchanged for cash,” he says. “On the other hand, 15th-century Florence really picks up the language of the troubadours and courtly love, and the poetry is filled with love lyrics.” 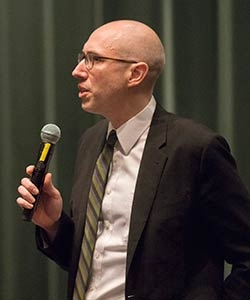 Adrian Randolph is the Leon E. Williams Professor of Art History and associate dean of the faculty for arts and humanities. (Photo by Eli Burakian ’00)

One strand of these lyrics describes men’s love for other men. “Florence was known for same-sex relations,” says Randolph. At the same time, such relationships were officially repressed. “There was a government agency basically geared to rooting it out.”

While hardliners like the Dominican Girolamo Savonarola were staging “bonfires of the vanities” and “the female body was utterly policed in terms of what it could look like in the public sphere,” Randolph says that artists, including Birth of Venus painter Sandro Botticelli, were exploring “a more open, liberating view of love and the body and sexuality”—though often these representations were “clothed in the texts of antiquity—in a notion of mythology that made it acceptable.”

Randolph thinks members of Dartmouth’s Renaissance FSP “would be struck by the artificiality of the discourses about love. People were writing poetry in this flowery language—‘I’ve been pierced by the arrow of Cupid!’—yet their marriages in many respects were business transactions, prostitution was government sanctioned, and sexuality was less romantic. There’s a huge break between people’s actions and their words.”

And if 15th-century Florentine exchange students were to arrive in Hanover on Feb. 14, 2015? “How long could they not have a heart attack?” Randolph wonders. “I think they’d be astonished by our public permissiveness. They certainly did show affection, but it was much more formulaic and performed. And the way in which men and women are more equal in our society would shock them.”

“They probably would also be trying to figure out who St. Valentine was,” he says.

According to Ryan Calsbeek, associate professor of biology, “You can go to any campus and see all the behaviors” of the male side-blotched lizard (Uta stansburiana)—the subject of his PhD research.

Calsbeek might want to take up that comparison with Professor Lively, but this is a species—the lizard, that is—that regularly plays a game of rock-paper-scissors with mating strategies.

Males have orange, yellow, or blue throats, and each color correlates to a different mating behavior, Calsbeek says. Orange males are aggressive and have lots of mates. Blue males (“the sensitive male lizard of the nineties”) are monogamous. Yellow males look and act like females, which are also yellow. 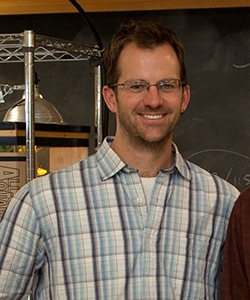 Ryan Calsbeek is an associate professor of biology. (Photo by Joseph Mehling ’69)

The more orange males there are in one year, the better the yellow males will do the next, which in turn will lead to a resurgence of blue males, followed again by orange.

This intraspecies competition is “an example of how mating strategies can actually maintain all kinds of cool variation in the wild,” Calsbeek says.

Calsbeek’s current work is on the brown anole (Anolis sagrei). The female anoles are much smaller than the aggressive males, and have little choice in their sexual partners. “But they have incredible control after the fact,” he says.

You read that right: The females actually store and select the sperm they use to fertilize their eggs.

Calsbeek explains: “Large male lizards carry genes for making really good sons, but also for making crummy daughters. Small males carry genes for really good daughters, but not sons. When females mate with big males, they use their Y-bearing sperm and discard the X. With small males, they use their X-bearing sperm. So they make their sons with big males and their daughters with small males.”

As for the oddities of reptilian reproduction, Calsbeek is just getting warmed up. “There’s no end to the lunacy in my laboratory,” he says. Just don’t look for lizards to observe Valentine’s Day. “It is not commonly recognized among reptiles. Although there are some lizards that have bright red throat patches.”