Editor’s note: Anna Stork ’08 and her business partner received a $200,000 investment Feb. 20 when they made a pitch for LuminAID on “Shark Tank.” They received offers from all five panelists, or “sharks,” and accepted the offer from Mark Cuban.

Anna Stork ’08 will appear on ABC’s Shark Tank at 9 p.m. on Friday, Feb. 20, to pitch LuminAID, the world’s first inflatable solar light. The Emmy-winning reality TV show asks entrepreneurs to make a presentation to a panel of investors—including billionaire Mark Cuban—who will then decide if they want to invest in the company. 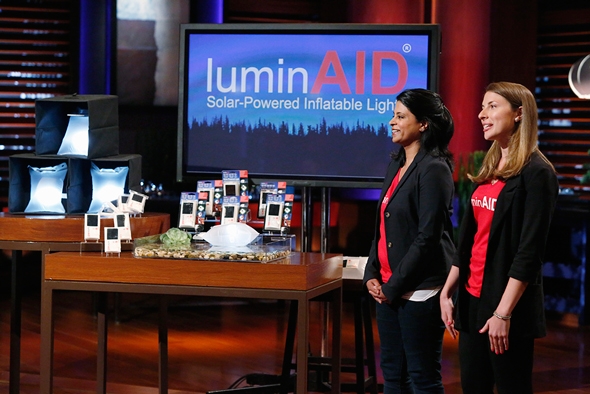 Anna Stork ’08, right, and Andrea Sreshta designed LuminAID when they were classmates at Columbia University’s Graduate School of Architecture. The two will appear on ABC’s “Shark Tank” on Feb. 20. (Photo courtesy of Anna Stork ’08 )

“LuminAID has yet to take on an investor, so potentially having a strategic Shark partner is something we are very excited about,” says Stork, who majored in engineering at Dartmouth. “During the taping, the investors asked me where I went to school and I told them about how supportive everyone from Dartmouth has been of LuminAID.”

LuminAID is an inexpensive, hand-held, inflatable, rechargeable, solar LED lantern for disaster relief aid, humanitarian use, or recreational use. Waterproof and easy to ship, it lasts longer than a battery-powered flashlight, is considered safer than a kerosene lamp, and doesn’t require expensive rechargeable batteries. It produces up to 16 hours of light, takes six hours to recharge, and can be recharged up to 800 times, says Stork. Sold on the luminaid.com website, the original model costs $19.95. A new, brighter version costs $24.95. Stork and Andrea Sreshta designed the light when they were classmates at Columbia University’s Graduate School of Architecture in response to the 2010 Haitian earthquake.

“At the time there was a lot of clean water, shelter, and food being shipped to Haiti, but most people in informal settlements were without a light source,” says Stork. “We saw a need for a portable light source to improve safety of people living in tents.” The simple solar technology has earned LuminAID awards and startup cash from business competitions, including the 2013 Clean Energy Challenge, Chicago Booth New Venture Challenge, and the 2014 Toyota Mother’s of Invention. Last year their Chicago-based company of four also took home a prize at the Chicago Innovation Awards.