Follow signs downstairs from the Main Hall of Baker-Berry Library into the corridor between the Orozco murals and Sanborn Library, and you’ll find one of the jewels at the heart of the Dartmouth campus: the Book Arts Workshop, where students, faculty, and members of the community can learn about—and practice—all things book. 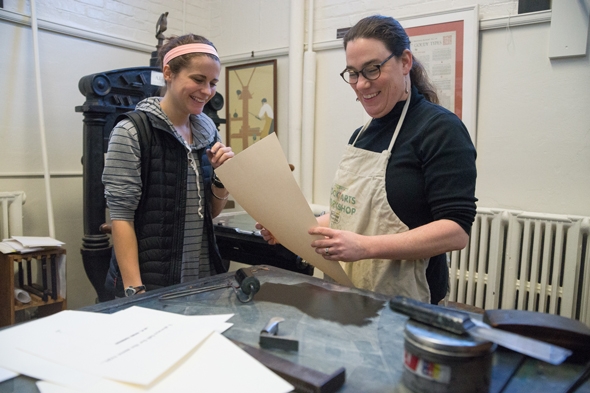 Dedicated to traditional—and nontraditional—letterpress printing, digital design, printmaking, and bookbinding, the Book Arts Workshop—which will celebrate its 25th anniversary in April—is one of only a few such academically based studios in the country.

The workshop, which includes a bindery, several presses, and dozens of metal and wood typefaces, offers free training, open studio hours, and more than old-fashioned techniques—for instance, computer-originated or scanned text and images can be used to make relief plates for printing on the workshop presses. “There are interesting things going on in letterpress these days,” says Sarah Smith, the Book Arts Workshop special instructor.

The workshop is available to faculty who want to incorporate book arts in their courses. Smith says more than a dozen classes have visited the studio in the past year, among them “The History of the Book,” taught by Associate Professor of English Alexandra Halasz; a computer science digital design course with Lecturer James Mahoney; an Italian language class led by Senior Lecturer Anna Minardi; Associate Professor of English Michael Chaney’s seminar on American folk artist known as “Dave the Potter”; a number of studio art classes; and a group from the Tuck School of Business.

Minardi brought her “Italian 3” class to the Book Arts Workshop to set in type a poem that the group had composed. She says she wanted students “to develop a sensual appreciation for the language and for words that are the very material they will use to express themselves. It was a great project because it activated all the senses.” 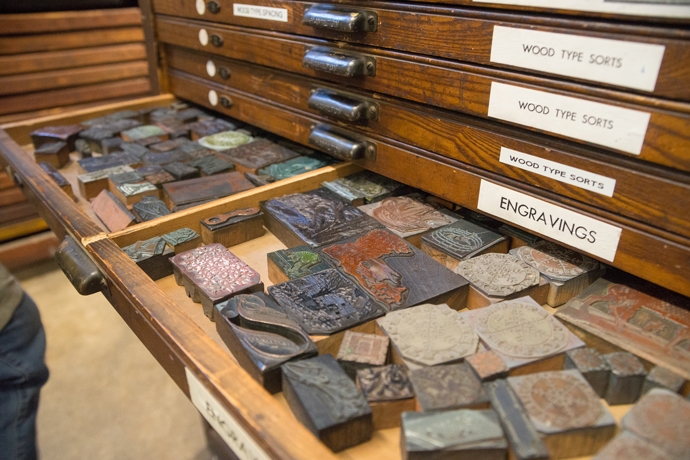 The Book Arts Workshop includes a bindery, several presses, and dozens of metal and wood typefaces, and offers free training and open studio hours for the Dartmouth community. (Photo by Eli Burakian ’00)

Patroklos Karantinos, Tuck ’12, who manages strategic projects for Tuck’s Executive Education Program, brought a Tuck Leadership Experience group to the Book Arts Workshop last summer. “The reviews were great,” he says. “The goal is not to make you expert at book printing, but here is something you can do with your hands and be creative. And Sarah made it easy for me to organize.”

“There’s something gained simply by the process of making,” says Halasz, who has brought her “History of the Book” and other classes to the workshop for several years. “The value is in affording an opportunity for different kinds of intelligences to come forward—and having that as an adjunct to a wide variety of classes, so whatever the intellectual content, there’s the possibility of making it more whole by providing a hands-on element.”

Students agree. Eva Petzinger ’15, a student assistant in the workshop, discovered the studio while taking Halasz’s course. “It’s really unusual to have a studio just there to use like this. You’re not going to be able to have this much access to such cool materials and good instruction many other places in the world,” says Petzinger, an English and cognitive science double major from Pittsburgh, Pa.

Another student assistant, Phoebe Novello ’17—a neuroscience major and linguistics minor from West Windsor, Vt.—also discovered the workshop through Halasz’s class. Novello says learning how to make books herself has deepened her appreciation for “the time and effort that went into making old books, and how much they must have been cherished.” She has also become an avid fan of modern artists’ books. “The best part is having an outlet for creativity. And I love type. It’s so satisfying.” 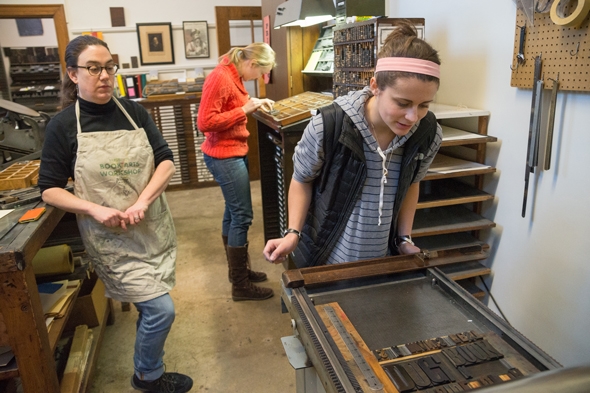 The Book Arts Workshop has a long history at the College, says Barbara Sagraves, head of Dartmouth Library’s Preservation Services—beginning with renowned graphic arts scholar Ray Nash, who ran its precursor from 1937 until 1970. “Nash mentored a number of prominent publishers and book designers, including David Godine ’66, Steven Harvard ’70, and Rocky Stinehour ’50,” Sagraves says.

Halasz says that the workshop’s legacy is “nationally important in the number of designers that Nash and Stinehour trained, and in the fineness of the work that the people they trained continue to do.”

After Nash’s retirement, the workshop went temporarily dormant, says Sagraves. “In 1989–90, three of his former students worked to reinvigorate it. That’s the anniversary we’re celebrating this year.” Those former students are Stinehour, Edward Connery Lathem ’51, and Mark Lansburgh ’49. The project to reestablish the workshop was also supported with funding from the Kenneth and Harle Montgomery Endowment.

In addition to supporting students and faculty, the Book Arts Workshop is contributing to the College’s global reach—including a recent collaboration with the University of Otago, in New Zealand.

Otago and Dartmouth are both members of the international Matariki Consortium. While attending a Matariki humanities colloquium in December, David Seaman, Dartmouth’s associate librarian for information management, discovered that Otago has a similar facility dedicated to the book arts. “We’ve already started an ongoing conversation to work out how we can collaborate more deeply,” he says.

A first stage in that partnership: Smith will be printer-in-residence at the University of Otago for six weeks in 2016. “We look forward to this residency strengthening a growing partnership between the Otago Book Arts program and ours,” says Seaman.