Nicotine isn’t healthy for people, but such naturally occurring chemicals found in the flowers of tobacco and other plants could be just the right prescription for ailing bees, according to a Dartmouth-led study. 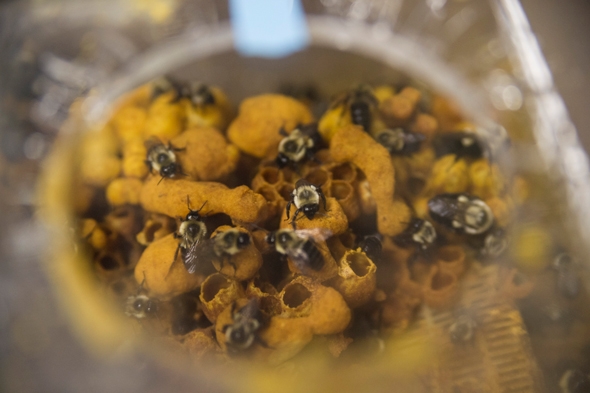 The researchers found that chemicals in floral nectar—including the alkaloids anabasine and nicotine, the iridoid glycoside catalpol, and the terpenoid thymol—significantly reduce parasite infection in bees. The results suggest that growing plants high in these compounds around farm fields could create a natural “medicine cabinet” that improves survival rates of diseased bees and pollination of crops. The researchers studied parasite infections in bumblebees, which, like honey bees, are important pollinators that are in decline around the world, a trend that threatens fruits, vegetables, and other crops that make up much of the food supply for people. 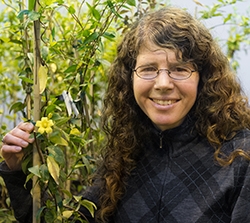 Rebecca Irwin is an associate professor of biological sciences. (Photo By Eli Burakian ’00 )

The findings appear in the journal Proceedings of the Royal Society B. A PDF of the study and photos of bees are available on request. The study included researchers from Dartmouth and the University of Massachusetts-Amherst.

Plants produce chemicals called “secondary metabolites” to defend leaves against herbivores. These chemicals are also found in nectar for pollinators, but little is known about the impact of nectar chemistry on pollinators, including bees. The researchers hypothesized that some nectar compounds could reduce parasite infections in bees, so they inoculated individual bumble bees with an intestinal parasite and tested the effect of eight naturally occurring nectar chemicals on parasite population growth. The results showed that consumption of these chemicals lessened the intensity of infection by up to 81 percent, which could significantly reduce the spread of parasites within and between bee colonies.

The study was recently featured on The Weather Channel