Lorenza Viola, a professor of physics, has been elected a 2014 Fellow of the American Physical Society (APS), joining the four other Dartmouth faculty similarly honored in the last decade. 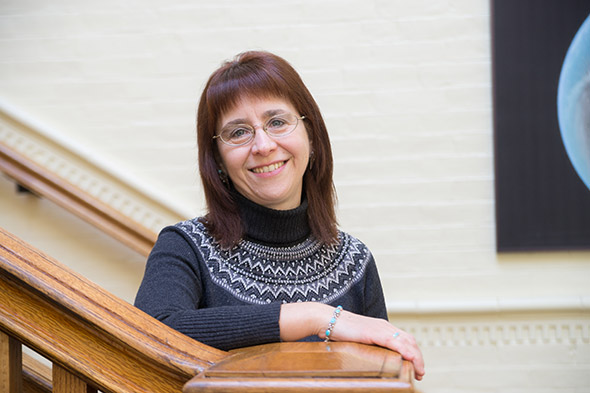 “I feel deeply honored by this recognition,” says Viola. “Professionally, it signifies to me a tangible sign of trust and appreciation from the scientific community I belong to—one I will continue to do my best to deserve. On the more personal side, I take this as the best possible reward for so many years of exciting work, for a career path that hasn’t always been easy, and also for what has been and will continue to be my own way to do science in the first place.”

The fellowship is “a distinct honor signifying recognition by one’s professional peers for exceptional contributions to the physics enterprise,” according to the APS website.

“As part of my research over the years, I have developed a number of quantum control strategies for counteracting and reducing the harmful effects of decoherence in open quantum systems, as well as provided new perspectives and insight into characterizing entanglement in quantum systems as they increase in complexity,” says Viola, who works in the quantum realm—a world of many mysteries.

Quantum mechanics, the body of principles explaining the behavior of matter and energy on the atomic and subatomic scale, essentially deals with a different reality from the everyday world. In the quantum world, an object can, in a way, be in two (or more) places at once, and quantum systems can be interconnected in ways that make them truly inseparable. What happens to one can change the other (in what’s known as “entanglement”).

Quantum objects, with their complex attributes, stand to revolutionize the world of information processing. However, the objects that carry the information (“qubits”) are fragile and, in a process called “decoherence,” can lose their ability to usefully store and transmit quantum information.

The other recent Dartmouth recipients of APS Fellow designation have included Barrett Rogers in 2010, Roberto Onofrio in 2009, Robert Caldwell in 2008, and Jane Lipson in 2004.