When the curtain opens in the Moore Theater for the final performance of the theater department’s winter production, Romeo and Juliet, the audience will see the last work—at the Hopkins Center for the Arts, at least—of set designer Georgi Alexi-Meskhishvili, who has influenced hundreds of students and dozens of Dartmouth productions for the better part of two decades. 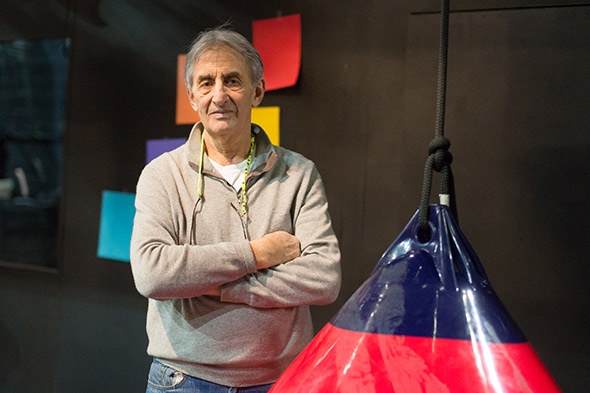 Visiting Professor Georgi Alexi-Meskhishvili on the set of the Department of Theater’s “Romeo and Juliet.” (Photo by Eli Burakian ’00)

A native of the Republic of Georgia, Alexi-Meskhishvili is an internationally known artist and theater designer whose work has been seen from New York City to Moscow, London to Buenos Aires, Paris to White River Junction. Now he is returning to Georgia to run the graduate school for design that he founded last year at the Shota Rustaveli Theatre and Film State University in Georgia’s capital city, Tbilisi.

“In Georgia we have a great tradition of theater, but after the collapse of the Soviet Union all this education system collapsed,” Alexi-Meskhishvili says. “We have a lot of talented people, but they’re missing a lot in their education. So I want to try to help make them professionals. After graduation they can work everywhere around the world—this is my goal.”

In 19 years as a visiting professor at Dartmouth, Alexi-Meskhishvili has designed sets for Angels in America, Eurydice, Spring Awakening, and many other productions. But he resists talking about past work. “I don’t think it’s right. You should look forward,” he says. “Because if you’re looking back, you think, I did this beautifully, let’s try this again. I don’t like to repeat myself.”

Even without looking back, it’s clear that Alexi-Meskhishvili has left his mark on the theater department—to the point where colleagues in the department have adopted his figures of speech to get across concepts associated with him.

“The big joke with Georgi is that he always says, ‘We fix it with light,’” says Dan Kotlowitz, chair of the theater department, imitating Alexi-Meskhishvili’s accented English. To Kotlowitz, who specializes in lighting design, “That phrase captures his sense of theater being a shared experience. It’s never just a set, never just the actors, never just the lighting. It’s all those things together.”

“He’s a great collaborator,” says Peter Hackett, a professor of theater and the Avalon Foundation Chair of the Humanities, who is directing Romeo and Juliet. “You never work with Georgi and find that the world that you’re working on gets smaller. It’s exactly the opposite.” 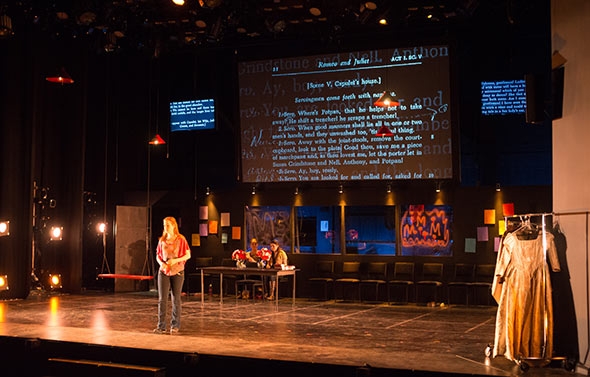 Georgi Alexi-Meskhishvili’s set for “Romeo and Juliet” includes some unexpected elements, such as a bright red swing. (Photo by Eli Burakian ’00)

Alexi-Meskhishvili is also a dedicated teacher—a recipient of the Dean of Faculty Teaching Award. “Georgi always puts the students first,” Hackett says. “He’s very perceptive about how to motivate students.”

Hannah Collman ’15, a theater and studio arts major from Sandy, Ore., took Alexi-Meskhishvili’s scene design course last year. “He had a good method of provoking and inspiring people to create their own work. His class had a graduate school aura: You do your own research on your own time, and he provided a space and questions for you to respond to as you developed ideas.”

Collman designed and codirected her first show, To Slay a Demon, earlier this term. “I definitely wouldn’t have been able to do it without mentors like Georgi,” she says.

Hackett once invited Georgi to his directing class to discuss how designers work with directors. The students were working on The Tempest, Hackett says, “and in the door walks Georgi and literally covered the floor of the rehearsal hall with visual references that he had collected. It was such an impressive teaching moment—the students’ jaws dropped.”

“When you design, you should have answers about everything you put on stage,” says Alexi-Meskhishvili. “Like any field, you do your research first. After the research gets to your head, it starts cooking, and you never know when you come up with ideas.”

His ideas often surprise. In the current production of Romeo and Juliet, staged as a rehearsal of the play itself, Alexi-Meskhishvili’s simple-seeming design of a rehearsal hall with tables is accented by some unexpected elements: a bright red swing and a big red ball.

“When I saw them, I knew I would be able to find an exciting way to use them,” says Hackett. “But it’s not like I tell Georgi, ‘I want a ball that swings back and forth.’ You talk about your feelings about a scene and he comes up with this really theatrical solution.”

Though he is going more than 5,000 miles from Hanover, Alexi-Meskhishvili and his Dartmouth colleagues hope to continue their collaborations, perhaps with Dartmouth faculty conducting master classes at Alexi-Meskhishvili’s school. “And hopefully we can have him back to do stuff,” says Kotlowitz.

And while he looks forward to returning to his homeland, Alexi-Meskhishvili says, “I have good memories about Dartmouth. I met some wonderful people here. I make a lot of good friends, which to me means very much.”

After Romeo and Juliet closes, Upper Valley audiences will have one more opportunity to see an original Alexi-Meskhishvili design, on the set of Songs for a New World, directed by Carol Dunne (a senior lecturer at Dartmouth) for Northern Stage in White River Junction, Vt., in April.

Romeo and Juliet runs through March 1.