Executive Vice President Rick Mills and Provost Carolyn Dever encouraged community members to get involved in changes that are in the works to enhance the student experience through the Moving Dartmouth Forward initiative, at Wednesday’s town hall meeting. 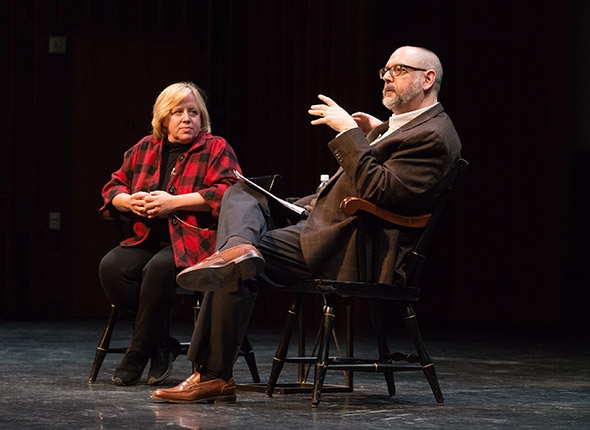 Mills, hosting the third of his noontime community meetings, opened the hour-long session with a story.

A human resources group working on a software system redesign realized that the company the College had hired to do the job was not up to the task. So they halted the project, reassessed the work, and changed course, Mills told the audience of about 150 people in Spaulding Auditorium at the Hopkins Center for the Arts.

“I think it’s a nice story to say it’s OK to make mistakes. It’s OK to have things go wrong. We just need to learn from them and we need to recover from them in ways that help make Dartmouth a better place,” Mills said.

He and Dever then discussed the ways the Moving Dartmouth Forward effort will make Dartmouth a better place—but only if there’s participation from the College community.

Dever said the plan presented by President Phil Hanlon ’77 on Jan. 29 is “integral to the academic future of Dartmouth.”

The components of President Hanlon’s plan—increasing academic rigor, holding students to a higher standard, banning hard alcohol, fostering a safe and inclusive environment—revolve around creating residential communities, called houses, to which students can always return, and where they will find support.

She called this new residential system “the jewel in the crown” of Hanlon’s program.

Each community will be headed by a “house professor,” and residences will have a chance to be affiliated with organizations such as the Hopkins Center for the Arts or the Hood Museum of Art.

“We have to figure out how to have a well-balanced academic community where students are 24/7/365 learners,” Dever said. “This is about taking down the walls that divide daytime Dartmouth and nighttime Dartmouth. We need ways to bring students and faculty together around fun as well as around serious academic work.”

High standards of academic rigor and social responsibility, and more adult interaction in student life should in no way diminish the College’s vibrant social, academic, and creative life, she said.

“Let me make really clear that this is not about creating a Dartmouth where fun goes to die,” Dever said. “It is about taking the extreme edge off in those few cases that are really damaging to this community.”

Audience member Ryan Hickox, an assistant professor of physics and astronomy and a member of the Moving Dartmouth Forward Steering Committee that presented its research and report to Hanlon in January, said committee members also see the housing plan as central to change at Dartmouth. He asked if faculty members and staff—in addition to the house professors—will be affiliated with the residential houses.

“You will be drawn in, and I hope you will say yes,” Dever said.

Mills amplified the point: “We have to be accountable by inviting you in, but you should hold yourself accountable by coming forward and saying, ‘I have something to contribute.’ Knock on our door.”

Dennis Brown, a fundraiser in the Advancement division, said the responses he’s heard from alumni have been “overwhelmingly positive and enthusiastic.” However, a few alumni donors have asked whether the ultimate goal of Moving Dartmouth Forward is to eliminate fraternities, he said, and he asked how to respond.

Student leaders know what’s at stake and they know that everyone will be held to the same high standard of accountability, she said.

“Those that don’t hit the mark will go. It’s not going to be a secret code book. It’s going to be a very clear conversation about very specific expectations,” she said. “It’s about how any given student group, a fraternity or the marching band, is contributing to the culture on this campus in a positive way.”

To a question from Assistant Athletics Director Donald Brooks about how the administration will measure success in encouraging diversity and inclusion, Dever said faculty diversity is a priority for her, and she pointed to her decision to name sociology Professor Denise Anthony the vice provost for academic initiatives. Developing faculty diversity is one of Anthony’s primary duties, she said.

“We are going to build a fully diverse faculty here at Dartmouth, and we have the resources to back up that commitment,” Dever said. “We’re working really hard on that, and it is the top priority of my office.”

The next town hall session is set for noon, on Wednesday, April 15, in Spaulding Auditorium.