Gone South for the Winter—Senior Does Research in Antarctica

Dartmouth undergraduate Diana Wise ’15 spent two weeks of her winter break in the dramatic domain of Antarctica, an experience she captured in a blog, “Gone South For the Winter,” which she filed from the field.

“It was an incredible experience, definitely one of the most amazing things I’ve done in my life,” says Wise, who returned from the frozen southern continent at the end of December. 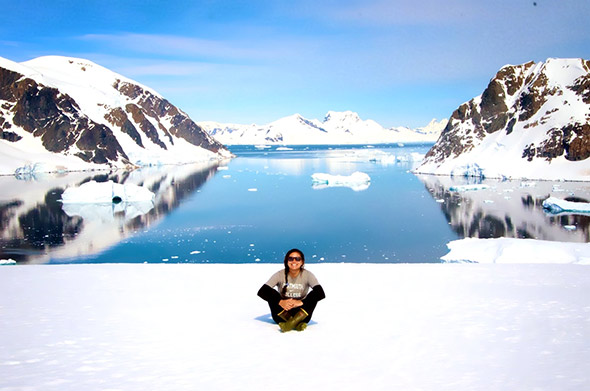 Diana Wise ’15 revels in being in Antarctica, “probably the most amazing place on Earth.” (Photo courtesy of Diana Wise ’15)

“Diana participated in the field portion of a multi-university Antarctica study abroad program that Environmental Studies and the Institute of Arctic Studies are supporting this year for the first time,” says Lee McDavid, the program manager at the Institute of Arctic Studies at the John Sloan Dickey Center for International Understanding. “Diana is the first student to enroll in this program, a unique opportunity, given that most students conducting field work in Antarctica tend to be graduate students.”

A double major in neuroscience and environmental studies, Wise chose Dartmouth for its “traditions, opportunities, and small town charm.” Her Antarctic sojourn was one of the opportunities she seized upon.

“The program was not only a once-in-a-lifetime opportunity, but I knew I would get a lot more out of it if I was engaging in research as opposed to traveling there as a tourist,” she says. “I had been very interested in ecotourism throughout my environmental studies major, and this was a great opportunity to apply my knowledge in the field.”

Wise was one of about 20 students, along with six faculty from colleges and universities across the United States, participating in the undertaking, one of the American Universities International Programs (AUIP). Wise says the AUIP conducts programs all around the world. Hers began with an online course in the fall. The students had a choice of two modules: ecotourism or the biodiversity of marine birds. Those studying the birds began their work on the three-day shipboard trip from the tip of Argentina to Antarctica.

“The faculty adviser was Professor Ross Virginia,” says Wise. “He was the sole reason I heard about this program and he really supported me throughout this entire thing.” Virginia has spent 19 seasons in the field as a researcher in Antarctica and directs the Institute of Arctic Studies.

“Our work based on the ecotourism module began when we arrived on the continent,” says Wise. “We were looking at human impacts on the continent and especially by the tourists. We were looking at different factors of how humans interact with the environment including wildlife, how we can spread pathogens from location to location, and how the educational programs on the ship affected the behavior of passengers on land.”

Wise and the other students focused on the disturbances caused by tourists being so close to the wildlife, including seals, penguins, and other Antarctic birds. She recalls a situation in which a naturalist leading her group came too close to a gull nest. The adult birds began squawking and flying in circles over the students.

“We were observing the actual effects, the impacts ‘on the ground,’ ” she says, acknowledging that the students were themselves having an impact, even though they were attempting to minimize it.

“Stress like this can sometimes cause chicks to fledge too early,” says Wise. “We also observed how difficult it was for penguins to maneuver in high snow that had been trampled and contained deep footprint holes. Usually their ‘penguin highways’ allow them to avoid such holes but sometimes, in attempts to avoid tourists, they would veer off the path and have a difficult and tiring time getting to their destination.”

Wise’s group collected data through interviews with passengers, staff, and the researchers who were onboard. “Our primary field observations were fundamental, but the interviews were half of the research because we wanted to observe their behavior and how they reacted to the guidelines provided earlier. We also were anxious to see how they interpreted those educational programs and if they are even aware of the impact they were making. It was interesting to ask those kinds of questions.”

Reflecting on her weeks in the wilderness, Wise remains ambivalent about ecotourism. “Part of me appreciates that I had the opportunity to see such an amazing place and now I am spreading the message of how important humans are to the environment there and how they can change it. So I think that my ambassadorship for Antarctica is a really key part of sending people there, but at the same time, I think that the International Association of Antarctic Tourist Operators guidelines are not sufficient to reduce human impact.

“No matter how many regulations, how many sanctions, how much enforcement you have, putting people on the continent will still make an impact,” she says.

Now back in Hanover, Wise contemplates her future. “I am still deciding what I am going to do next year but I hope to attend a post-baccalaureate program for medical school in a year. I am looking into clinical research positions and positions at global health organizations for the upcoming year.”