Using a technique known as “Gene Rank” (GR), Norris Cotton Cancer Center investigator Eugene Demidenko captured and described a new characterization of gene connectivity in “Microarray Enriched Gene Rank,” published in BioData Mining. The effective computer algorithm can be used to compare tissues across or within organisms at great speed with a simple laptop computer. Demidenko is a professor in the recently established department of Biomedical Data Science at the Geisel School of Medicine, and an adjunct professor at both Thayer School of Engineering and the Department of Mathematics. 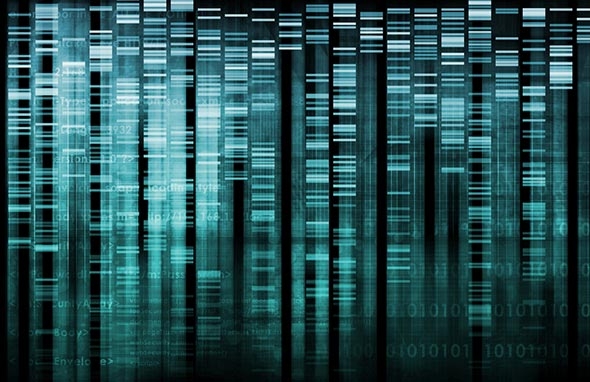 “Gene Rank is computed based on gene expression data and reflects how well a particular gene is connected to other genes,” says Professor Eugene Demidenko. (Photo by Shutterstock)

“This paper introduces a new bioinformatics concept called Gene Rank (GR),” explains Demidenko. “GR is computed based on gene expression data and reflects how well a particular gene is connected to other genes. Our GR is built along the lines of PageRank, used by Google to rank and display web pages upon key word search.”

As a new scientific concept, GR looks at genetic networks from a different angle that may lead to new biological insights and formulation of new scientific hypothesis with important clinical applications. Many other studies in bioinformatics have tested their concepts using computer simulation. Demidenko tested GR on various de novo studies, resulting in plausible biological findings. For example, one series tested the complexity of genes in four stages of the development of rice, showing that it gradually increased over time. A subsequent test of Drosophila flies showed their genes to be more complex than rice, but less complex than human genes. These are expected findings, and meeting biological expectations is a respected validation of concept.

Demidenko applied the GR concept to several cancer-related gene expression data sets, and discovered that disconnected genes in tumors are cancer associated. “It’s a provocative statement, but we can say that cancer genes are lonely killers,” said Demidenko. Further investigation revealed that GR of the same gene changes during cancer development, and that this can be used for disease prognosis as well as early cancer detection.