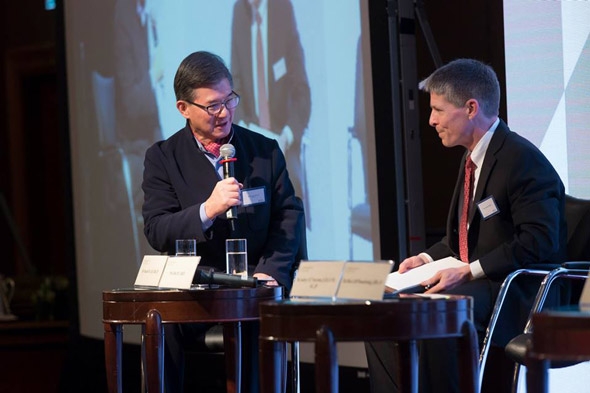 Carey, the John Wentworth Professor in the Social Sciences and the chair of the government department, spoke on “Democratic Principles and the Design of Electoral Systems” at a Feb. 14 public event at Hong Kong University of Science and Technology. The university was the target of a massive student boycott in support of the pro-democracy Occupy Central with Love and Peace movement, which camped out in several major city intersections from September through December 2014.

“Professor Carey has given us a very clear presentation on the pros and cons of different electoral systems globally,” says panelist Dixon Ming Sing, a professor of government at the university, writing from his Hong Kong office. Sing was one of 32 academics who initiated a petition supporting the student boycott during the Occupy Central demonstrations.

Carey presented a survey of democratic structures for electing a chief executive—under parliamentary or presidential systems, for example—to the panel, which included pro-democracy leaders and representatives from Hong Kong’s executive and legislative branches. The event was moderated by a leader of the Hong Kong business community and attended by members of the public on all sides of the issue, says Carey, “judging by the often-vocal reactions.”

“My sense is they wanted me as a kind of a fulcrum, since I’m not really known to them, and I don’t have a dog in the fight,” he says. 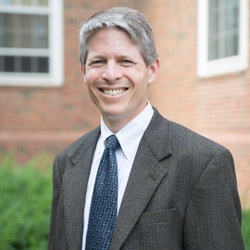 John Carey is the John Wentworth Professor in the Social Sciences and chair of the government department. (Photo by Eli Burakian ’00)

“It was a way of getting a bunch of people who otherwise wouldn’t participate in the same event into the same room together. I’m not an expert on Hong Kong, so for me it was a huge educational experience, and I was happy to try to play that role.”

Discussion that followed his presentation focused on an unusual arrangement used in Chile during the 1990s and 2000s, known as “functional representation,” says Carey. The system provided representation for some state institutions—such as the military, courts, and universities—alongside representatives elected by the people. The system is similar to the plan China supports for Hong Kong, which opponents say ensures that Beijing will maintain tight control of elections.

“What was most inspiring for me was that when Professor Carey mentioned the use of functional sectors to fill in some legislative seats in Chile, he stressed the difficulty of those sectors surviving, owing to the need for checks and balances and the prevalence of democratic ethos there,” Sing says.

“Hong Kong’s non democratic system has been marked by the huge political influence of functional sectors, which have strengthened crony capitalism and undermined the overall governance of this important city,” Sing says.

Audrey Eu, the chair of the opposition Civic Party and a supporter of last year’s demonstrations, was also outspoken in her opposition to functional representation for Hong Kong.

Eu is a key pro-democracy figure. “Some people in Hong Kong think she would be a viable candidate for chief executive—essentially Hong Kong’s governor—if the elections were held under a different set of rules,” Carey says.

Also participating in the forum were Executive Council Convenor Woon-kwong Lam—the equivalent of chief-of-staff to Hong Kong’s Chief Executive C.Y. Leung—and Jasper Tsang, president of Hong Kong’s legislature. Leung and a majority of the legislature are backed by the Chinese government.

The Hong Kong officials were interested in exploring the details of how Chile’s system functioned and was administered, Carey says. The government leaders did not diverge from Hong Kong leader Leung’s official resistance to direct elections.

The forum was moderated by Vincent Lo, chairman of a billion-dollar real estate development firm. The business leaders of Hong Kong are motivated to bring both sides together, Carey says. Unrest in the streets and political instability are not in their interest.

It’s difficult to say if the sides will be able to find middle ground, Carey says. He pointed to a recent overture from Hong Kong officials suggesting that changes to the electoral process may be possible, but not until 2022.

”It was a first, very small, gesture of openness to compromise from the pro-Beijing side on the electoral rules,“ he says. ”It has been greeted as too little, too late by the pan-democrats, so it might come to nothing. But it’s the first hint of any flexibility from the government.“

Sing, the pro-democracy Hong Kong University professor, maintains progress is possible. ”Hong Kong can and should learn from human history, standing firm on our ground of demanding a genuine democracy for achieving equality, human dignity, and better governance," he says.