The image that comes to mind might be of a lone scholar poring over books in a library carrel. But contemporary scholarship in the humanities is increasingly a team effort—one that draws from multiple academic disciplines and divisions, takes advantage of digital technologies to share information, and links researchers and institutions across continents. 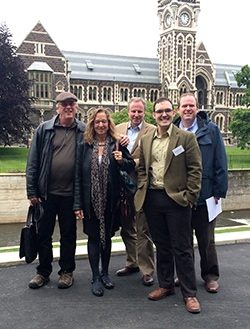 Case in point: This past December, a team of faculty and librarians from Dartmouth—English professors Ivy Schweitzer and Tom Luxon, assistant professor of history Paul Musselwhite, and librarians David Seaman and Morgan Swan—traveled halfway around the world to a colloquium on the humanities hosted at the University of Otago in New Zealand.

Otago, like Dartmouth, is one of seven “sister” institutions that make up the Matariki Network of Universities, formed in 2010 as an international consortium that also includes Queens University in Canada, Durham University in England, Uppsala University in Sweden, the University of Tübingen in Germany, and the University of Western Australia. (“Matariki” is the Maori name for the Pleiades, or Seven Sisters, constellation of stars.)

The colloquium was the first of a series of five to be held at Matariki campuses over the next five years—a series developed as an outcome of a conference hosted by Dartmouth in September 2013.

The Otago colloquium’s theme was pre-modern studies—and the focus was not simply on the content of specific research, but on how the participating scholars and their institutions could build effective networks and infrastructure to collaborate with each other.

Faculty attendees discussed how the discipline is practiced at their own institutions, examples of current research, and models of research-informed teaching. For the latter, Luxon, the former director of Dartmouth’s Center for the Advancement of Learning, presented on what he calls the “apprentice model,” in which faculty work with undergraduates to produce not just research papers but also scholarly articles that they submit to academic conferences.

Schweitzer presented on her “Occom Circle” project, a grant-funded partnership with the Library to digitize the archives of Samson Occom, the 18th-century Mohegan missionary who helped Eleazar Wheelock raise funds for his new college in Hanover. She was excited to learn about a comparable digital archive project at Otago, collecting the papers of 19th-century missionary Samuel Marsden—and was invited to contribute a paper about the Occom project to a volume on indigenous writing in the colonial period, edited by two members of the faculty of Otago’s indigenous studies department.

“Here’s a concrete example of collaboration starting to happen,” she says. “I’m at the right place at the right time to contribute to this volume, and they get to have a U.S.-based perspective. I feel privileged to be asked to be part of that.”

Musselwhite presented his research on the development of plantation settlements in 17th-century Virginia. Discussions with colleagues from other institutions have sparked his curiosity about comparative colonialism. “I’m an early Americanist, but in many respects it’s really about the British Empire,” he says. “It would be interesting to develop a course that integrates comparative elements, including the Pacific, for later British colonialism.”

Musselwhite is enthusiastic about the potential for faculty exchanges with Matariki partner schools that have different specializations, noting Durham’s Institute of Medieval and Early Modern Studies, Western Australia’s Center for the History of Emotions, and Otago’s strength in the history and the culture of the Antipodes. “And some of these institutions have very little American history at all,” he says. “Exchanges would enliven the curriculums and bring new perspectives.”

Meanwhile, the librarians discussed ways of supporting faculty scholarship, digital projects, and ways of creating more user-centric approaches to collections. They also launched a benchmarking project to evaluate how library spaces support the student experience. For this exercise, Dartmouth is looking at the renovation of the Jones Media Center. “When Jones reopens this spring, there will be more collaborative workspace, a new studio, and a much better flow,” says Seaman, Dartmouth’s associate librarian for information management. “We want to evaluate new patterns of use, and see whether our planning has been successful.”

Other institutions’ libraries are also reconfiguring spaces around collaboration, he says. “We’re all seeing this move from the lone researcher to groups of people working together. That often means quite profound things for the way space is laid out—a row of single carrels doesn’t work well for collaborative work.”

Seaman was excited to find a book arts workshop in Otago similar to Dartmouth’s facility in the lower level of Baker-Berry Library. “We’ve already started an ongoing conversation to work out how can we collaborate more deeply.”

Special collections education and outreach librarian Swan presented on how Rauner Library engages undergraduates with its rare collections—something that spurred a lot of interest from other participants. “Many of them measure success in terms of research produced from the collections. We love it when scholars publish books out of the collections, of course, but our sense of what success looks like is different.”

For the delegation from Hanover, the benefits of the Matariki Consortium are clear. “If you want to grow in the early modern area, as Dartmouth does, it’s really helpful to see what other institutions are doing,” says Schweitzer.

Seaman adds, “It gives us the opportunity to demonstrate—in an international context—what we’re doing in the humanities and the library.”

“I am delighted by the success of the Otago meeting,” says Colleen Boggs, director of Dartmouth’s Leslie Center for the Humanities, which helped sponsor Dartmouth’s delegation to Otago. “It is deeply gratifying to see the idea we conceptualized at the meeting here at Dartmouth take shape and gain traction. The humanities are at the forefront of innovating education on a global stage, and it is a pleasure and a privilege to be at an institution that is assuming a leadership role.”