Members of the Dartmouth community were not the only ones paying attention on Jan. 29 when President Phil Hanlon ’77 presented his much-anticipated Moving Dartmouth Forward Plan to address high-risk behavior on campus and transform the student experience. 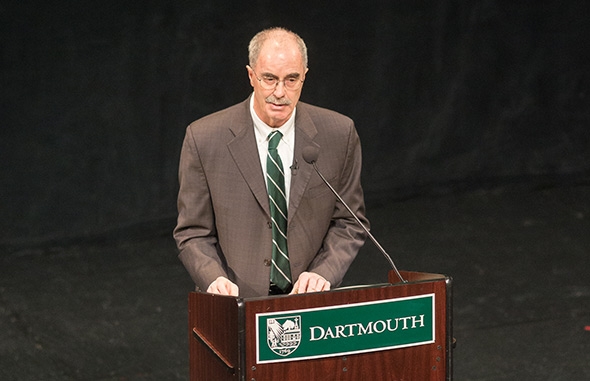 “Everything is possible for Dartmouth,” Dartmouth’s 18th president said during his Jan. 29 speech about his Moving Dartmouth Forward Plan. (Photo by Eli Burakian ’00)

From the Upper Valley of Vermont and New Hampshire to Boston to London, in dozens of articles and editorials, the media wrote about what President Hanlon, in his speech, called Dartmouth’s “moment.”

“Everything is possible for Dartmouth,” Dartmouth’s 18th president told his audience, invoking the name of the 13th president, John Kemeny, who presided over the College’s transition to coeducation. “But our aspirations will never be realized if we fail to address a vital component: the environment in which our students live and learn. Like Kemeny, we must recognize a moment in time when change is necessary to reach our potential. Now is such a moment.”

The Washington Post’s headline summed up much of the coverage: “No Hard Alcohol, No Pledging, Dartmouth Plans Major Cultural Reforms.”

The Boston Globe put Dartmouth in the forefront of schools taking action to address high-risk behavior on campus: “The major overhaul, spelled out by President Philip Hanlon in a speech to the Dartmouth community, places the school among the leaders of colleges targeting binge drinking, sexual assaults, and other problems,” wrote the Globe on Jan. 29. “Hanlon warned Greek organizations that if they fail to make improvements, their future could be in doubt.”

Editorials in media large and small praised Hanlon’s decisiveness even while acknowledging a wait-and-see attitude toward a few of the plan’s major tenets, such as the ban on hard alcohol on campus and stricter standards for Greek organizations.

In a Feb. 3 editorial, The Boston Globe wrote that it is “up to students to solve the fundamental problems that are eroding campus life at Dartmouth. If Hanlon’s policies force undergraduates to re-evaluate the school’s social life, that is certainly for the good.”

And bringing the ambitious plan back to Hanlon and the vision he spoke of during his inauguration, the Valley News editorial of Feb. 1, “Mending Dartmouth,” praised the president’s approach and offered a possible explanation for at least part of Hanlon’s dedication to transforming the campus culture.

“Hanlon clearly grasps how the questions of academic and social life are inextricably intertwined for students, and how increased academic demands might address social issues,” wrote the Valley News.

“Maybe,” wrote the newspaper, “it’s just because he really does love the place.”

Below is a roundup of some of the news stories, editorials, and opinion pieces.