Students who sign up for Vicki May’s online course, “The Engineering of Structures Around Us,” may live in California or Haiti. They may be high school students interested in careers in engineering or retirees who want a deeper understanding of architecture. Regardless, May, an associate professor at Thayer School of Engineering, wants them to use their hands. 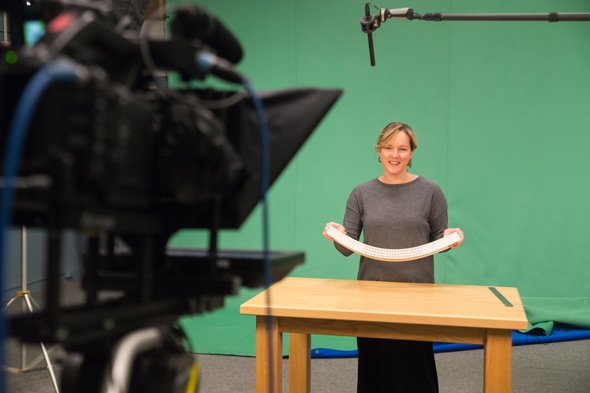 Vicki May, an associate professor at Thayer School of Engineering, during the production of her DartmouthX massive open online course, “The Engineering of Structures Around Us.” (Photo by Eli Burakian ’00)

Registration is now open for May’s course, the second of four initial DartmouthX massive open online courses, or MOOCs, that the College is producing this year in conjunction with the nonprofit online learning consortium edX. The first, “Introduction to Environmental Science,” taught by Andrew Friedland, the Richard and Jane Pearl Professor in Environmental Studies, began this week.

Two others are expected to launch during the next 12 months: an introduction to opera, taught by Professor Steve Swayne, chair of the music department; and literature of the American Renaissance, with Don Pease, the Ted and Helen Geisel Third Century Professor in the Humanities, and James “Jed” Dobson, a lecturer in writing.

Josh Kim, Dartmouth’s director of digital learning programs, says he’s pleased with the progress of all four courses. “Each one presents unique challenges and opportunities, and each is bringing new lessons back to Dartmouth’s own classrooms—which is one of the primary goals of the DartmouthX program,” he says.

An award-winning teacher and a former associate director of Dartmouth’s Center for the Advancement for Learning (DCAL), May was drawn to creating a MOOC “because I wanted to be part of the experiment. I love thinking about teaching and learning, and I figured if I create something that thousands of people can learn from, maybe it will make me a better teacher.” 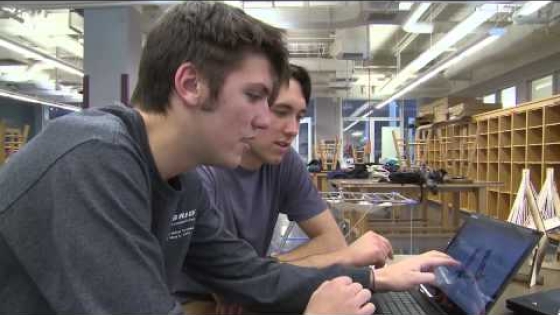 Like Friedland, who has said that developing his DartmouthX course inspired him to take “a more interactive approach” in the classroom, May says she’s already learned from the process of transforming her standard course material for a large online audience. Working as part of a team that includes an instructional designer, a computer programmer, a videographer, and a reference librarian has made May “more conscious of how I organize my information,” she says. “It’s been great working with an instructional designer who asks a lot of questions.”

Her biggest challenge has been adjusting to being on camera. “I’m warming to the video part,” she says, but it didn’t come naturally. At first, she couldn’t find a way to sound natural while reading the teleprompter. “We’ve ended up using bullets instead of full sentences in the script, and that seems to be working better for me.”

The team has helped May create video and computer-generated simulations that she plans to incorporate in future conventional courses. One of her favorite new techniques: using a lightboard, “a glass panel that I can write on with my marker and still face the camera.” The film editors flip the resulting image so that the glass is readable on screen. As May told faculty members during a Thayer talk on MOOCs this past fall, the process “leads to a Princess Bride moment: I know something you don’t know—I’m not left-handed!”

Her talk at Thayer spurred lots of interest among faculty about MOOCs in general and the lightboard in particular, she says. “Other faculty saw me using it, and now they’re using it for brief explanations students can watch before class. We’re not going to ‘MOOC-ify’ all courses, and I don’t think we should, but the process has already generated great conversations about teaching and learning.”