So you think you know Shakespeare’s Romeo and Juliet, that straightforward tale of young love that comes to a tragic end? You may think differently after seeing the Department of Theater production, which opens Friday, Feb. 20, and runs through March 1. 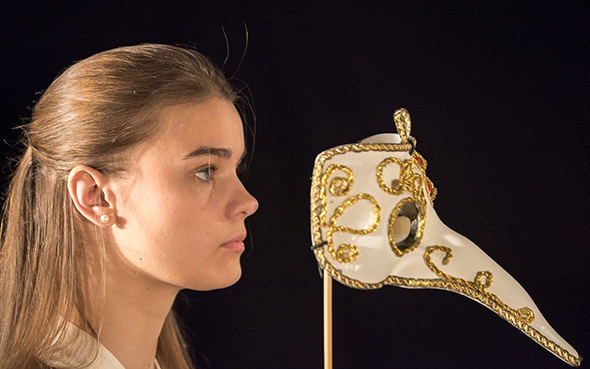 “Romeo and Juliet” cast member Mary Clare Seeman ’18 with a mask made by Laurie Churba Kohn, an associate professor of theater. (Photo by Jason Merwin)

“I was talking to my colleague, Professor Jamie Horton, and said I wanted to do Romeo and Juliet,” says Professor of Theater Peter Hackett, who is directing the production. “He said, ‘I don’t want to see just another Romeo and Juliet.’ That was it. The gauntlet was thrown.”

Even in versions that modernize the setting—such as the 2013 Broadway production in which a leather-jacket-clad Orlando Bloom as Romeo roars onstage on a Triumph motorcycle and romances an African American Juliet (played by Condola Rashad)—the standard interpretation tends to adhere, Hackett says.

“We seem to be locked into a 19th-century, romantic version of this play,” he says. “And yet when you really sit down with the text, there’s so much more. There’s a lot about politics, religion, family, the status of women—all sorts of things that are rarely an important part of any production I’ve seen. We want to shake up that preconception—keep the romance but also bring forth themes that have been neglected. We want people to be able to see the play as if they are seeing it for the first time.

“The play is a parable about what happens to a society when its three major institutions—the church, the government, and the family—fail their own children, the generation following them. I’d say that is a story for our times,” says Hackett.

To get at these themes, Hackett sets the play in a modern-day rehearsal studio equipped with long folding tables and chairs, costume pieces on dressmaker’s dummies, video cameras, monitors, and a large overhead screen. Using a combination of prerecorded footage and live action, the cast performs a trimmed but complete, sequential version of the play, interspersing it with asides about life in Renaissance Italy and the actors’ own responses to the text. The version of the play dates from 1937, and was created for San Diego’s then-new Old Globe Theatre.

The play also will be the Dartmouth swan song of set designer Georgi Alexi-Meskhishvili, who retires this spring after 19 years as a visiting professor of theater, teaching scenic design and creating sets for several theater department productions each year. A renowned scenic designer and visual artist, Alexi-Meskhishvili will devote himself full-time to a national school for theater design he opened last fall in Tbilisi, capital of his native Republic of Georgia.

Prerecorded video will be a part not only of the stage production but also of video loops playing in the lobby before the show. The loops will include footage of individual Dartmouth students and area high school students delivering favorite speeches from Romeo and Juliet or offering their views on what the play is about.