Aaron Goodman ’15 was intrigued when President Obama announced in 2013 that he would seek Congressional approval to launch air strikes against Syria, and at the same time asserted that he already had the authority to do so. 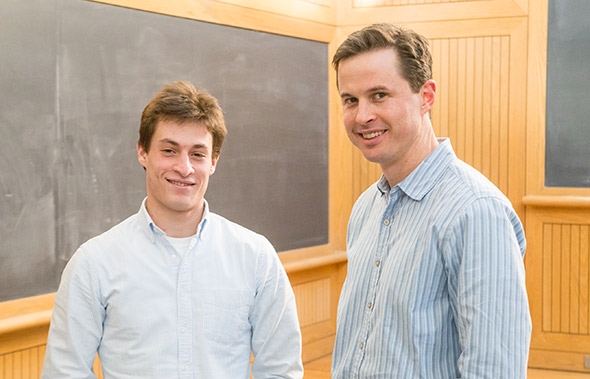 Goodman did a case study of Obama’s policy in Syria, Presidential Delegation of Foreign Policy Powers, for Assistant Professor of Government Brendan Nyhan’s fall 2014 class, “The Presidency.” In his research, Goodman discovered that most of the scholarly literature on the subject argued that while presidential powers are more limited domestically, the executive exercises greater unilateral authority in matters of foreign policy.

Goodman’s final paper, looking at why Obama might ask Congress to authorize an action that he already had the power to take on his own, went on to win an award as the best undergraduate paper on executive politics in 2014 from the American Political Science Association’s (APSA) Presidents and Executive Politics section.

“What was especially sophisticated about his paper is the way that he challenged existing theories about how the president uses his power in foreign policy,” says Nyhan, who told Goodman about the contest and asked him to submit the paper to the association.

The Presidents and Executive Politics section of the APSA said Goodman’s paper was among “the finest work of the year among presidency and executive politics scholars.” The contest also included categories for best book, best PhD-holding scholar, and best paper by a graduate student.

“Mr. Goodman challenges the ‘two presidencies’ thesis by arguing that presidents are often hamstrung by institutional limits, especially delegations from Congress,” wrote award committee chair Professor Brandon Rottinghaus of the University of Houston. “The committee was nearly unanimous in their pick of this paper as the year’s winner. Please join me in congratulating Mr. Goodman and his professor Brendan Nyhan on an excellent (and now award winning) paper.”

Goodman examined news accounts, transcripts of presidential statements, and press conferences related to Obama’s response to reports that President Bashar al-Assad of Syria had used chemical weapons against his own people. Goodman argues that domestic concerns—such as an impending vote by Congress on extending the debt limit and the launch of online health care exchanges through the Affordable Care Act—as well as a lack of international support for action in Syria, led Obama to reach out for broader political backing.

“To do this on his own without Congress was risky—he risked the cooperation he needed on domestic policy,” Goodman says. “And all the blame would center on him if it failed, because he really didn’t enjoy international support or wider backing.”

All the students in “The Presidency” work with Nyhan to develop a case study in presidential politics for their culminating paper.

“What I emphasize is that students shouldn’t write book reports, they should make analytical arguments. Often, they’ve been trained to summarize other people’s ideas. So we focus on how to make their own arguments and how to engage with the scholars we read,” Nyhan says.

“This engagement between data and theory is where the best empirical social science happens, and Aaron’s paper is a great example of that.”

Goodman, a double major in government and economics, has lined up a position at Cornerstone Research, an economic consulting and expert testimony firm, after graduation. Eventually, he hopes to return to graduate school for economics, he says.

At Dartmouth, Goodman says he was drawn to concentrations in American politics and political theory and constitutional law “because of two great professors in these two areas,” Nyhan and Associate Professor Sonu Bedi. Goodman is working with Bedi on a senior thesis about Abraham Lincoln’s contributions to the theory of constitutional interpretation.

“I think this signals Aaron’s scholarly potential in economics or any social science field,” Nyhan says.

In the longer term, Goodman says he would like to be involved in “policy making in the larger sense—institutions like the Fed, or the IMF, or the Council of Economic Advisers. I think that would be the end goal, if that’s possible, after grad school.”

Nyhan says he expects Goodman to make a great contribution to the field he chooses.

“He’s just a brilliant social science mind,” Nyhan says. “He really is the best that Dartmouth can offer the world—not that we can take much credit for him. But hopefully we helped him a little bit.”