In the first U.S. study of urinary arsenic in babies, Dartmouth researchers found that formula-fed infants had higher arsenic levels than breast-fed infants, and that breast milk itself contained very low arsenic concentrations. 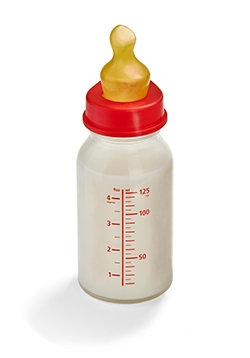 In a new study, Dartmouth researchers found that formula-fed infants had higher arsenic levels than breast-fed infants. (Photo by Shutterstock)

“This study‘s results highlight that breastfeeding can reduce arsenic exposure even at the relatively low levels of arsenic typically experienced in the United States,” says co-lead author Kathryn Cottingham, a professor of biological sciences. “This is an important public health benefit of breastfeeding.”

The researchers measured arsenic in home tap water, urine from 72 six-week-old infants, and breast milk from nine women in New Hampshire. Urinary arsenic was 7.5 times lower for breast-fed than formula-fed infants. The highest tap water arsenic concentrations far exceeded the arsenic concentrations in powdered formulas, but for the majority of the study’s participants, both the powder and water contributed to exposure.

“We advise families with private wells to have their tap water tested for arsenic,” says senior author Margaret Karagas, principal investigator at Dartmouth’s Children’s Environmental Health and Disease Prevention Research Center and a professor of community and family medicine at the Geisel School of Medicine. Added study co-lead author Courtney Carignan: “We predict that population-wide arsenic exposure will increase during the second part of the first year of life as the prevalence of formula-feeding increases.”

Arsenic occurs naturally in bedrock and is a common global contaminant of well water. It causes cancers and other diseases, and early-life exposure has been associated with increased fetal mortality, decreased birth weight, and diminished cognitive function. The Environmental Protection Agency has set a maximum contaminant level for public drinking water, but private well water is not subject to regulation and is the primary water source in many rural areas in the United States.