Thayer School of Engineering’s Mary Albert has been awarded $17.4 million by the National Science Foundation (NSF), enabling her to lead and manage the U.S. Ice Drilling Program through 2018. 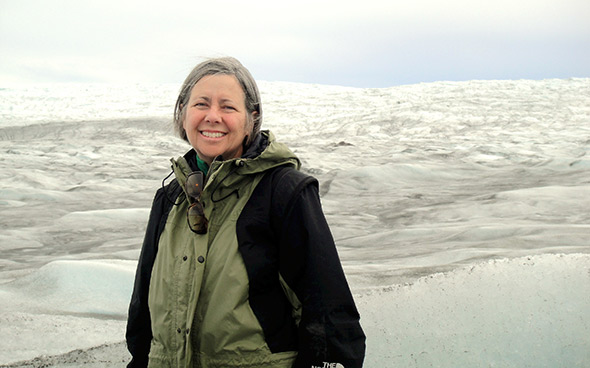 In 2010, the National Science Foundation (NSF) took a decisive step in creating the U.S. Ice Drilling Program Office (IDPO) and naming Albert, a professor of engineering, its first executive director. In this capacity, she led the ice-drilling research community in mapping out the direction of ice core science and guiding implementation of the resulting plan.

Albert worked with the newly established Ice Drilling Design and Operations group (IDDO), which is based at the University of Wisconsin, and includes the engineers who produce the drills and put them into service in Greenland and Antarctica. The original 2010 awards to Dartmouth and the University of Wisconsin were under separate NSF agreements with separate management. A revamped structure under the new 2015 funding provides a more integrated approach to research and technology planning and execution, with Albert at its head.

“The first five years went so well that NSF awarded the entire effort to IDPO at Dartmouth, where IDDO activities and functions at other institutions would be sub-awards,” Albert says. “It’s not a major shift of goals—just a shift in the way we achieve those goals.”

Albert and her colleagues look into the cold interiors of the polar ice sheets, where they can find well-preserved and detailed climate records. According to statistics from the National Ice Core Laboratory, the oldest continuous ice core records extend to 130,000 years in Greenland, and 800,000 years in Antarctica.

“With the currently changing climate, it has never been more important to understand how the Earth system works in the context of past climate. From this knowledge we can learn about what to anticipate in the future,” says Albert. “The science that we aim to achieve is compelling, and we’re really pleased that the NSF has looked to us and to Dartmouth for leadership in this global issue.”

To cover the newly acquired additional workload, Albert hired a project management professional—Blaise Stephanus—to handle the IDPO day-to-day financial work. “If I had to do all that myself, I would not have time to also work with my students or on my own research,” Albert says. “Blaise has a lot of prior experience in major NSF programs. He is a familiar face to them, so he knows what they need, what they want.”

In addition to Stephanus, Albert employs Linda Morris as director of education and public outreach for the IDPO. “She organizes programs that are on a national scale. Linda works with the National Science Teacher Association and with the American Meteorological Society, for example, to organize conferences and to conduct webinars that science teachers from all across the nation tap into.”

The three members of the office interact with many people across the nation. The IDPO is the only nationally funded program within the U.S. that organizes and directs scientific ice drilling missions for scientists across the country, and it serves as the single U.S. point of contact in the international ice drilling community.