Dartmouth has offered 2,120 students acceptance to the Class of 2019. Over previous years' figures, the number represents more students who will be the first in their families to attend college and more students from the western United States.

Dartmouth has offered 2,120 students acceptance to the Class of 2019.

The College notified regular decision applicants of their admission status today at 5 p.m. Students got the news after logging in to a secure website. The accepted students come from a group of 20,504 applicants, representing an admission rate of 10.3 percent. Included in the number of accepted applicants are 483 students admitted in December 2014 through the early decision process.

Admissions officers expect to enroll approximately 1,120 students in the Class of 2019; they will be seniors when Dartmouth celebrates the 250th anniversary of its founding.

Along with online access to their letters of admission and, in many cases, their financial aid awards, admitted students saw a congratulatory video featuring current students welcoming the 2019s to Dartmouth.

“We’re thrilled to invite this ‘Anniversary Class’ to Dartmouth,” says Maria Laskaris ’84, dean of Admissions and Financial Aid. “As a group, they embody our highest aspirations for our students in their academic accomplishments, their diversity of backgrounds and experiences, and their potential for significant contribution to our community.”

In addition to an essay required in the Common Application process, this year Dartmouth required that applicants write an essay on one of five topics. These additional essays provided depth and texture to the applications submitted by students, says Laskaris. "For example, we asked applicants to share the story of the origin of their first or last name or to describe a meaningful intellectual experience. Their responses were fascinating and heartfelt and gave us a more nuanced understanding of the uniqueness of each applicant," she says.

Dartmouth continues to draw students from diverse backgrounds from across the country and around the globe. The Class of 2019, Laskaris says, is notable for the number of students admitted from the Western states. Just under 27 percent of admitted students come from Alaska, Arizona, California, Colorado, Hawaii, Idaho, Montana, New Mexico, Nevada, Oregon, Utah, Washington, and Wyoming, up from 22.7 percent of those admitted last year. International students comprise 7.9 percent of the admitted group.

The students admitted to the Class of 2019 have average SAT scores in the 98th percentile nationwide, and just under 95 percent of them rank in the top 10 percent of their graduating class (of secondary schools that report class rank).

As part of its commitment to increasing accessibility, the Admissions Office places a high priority on building relationships with community-based organizations that help colleges and universities connect with applicants from under-resourced schools. Dartmouth continues to partner with organizations such as the Sutton Trust, College Horizons, and Prep for Prep, as well as numerous local and regional programs. This year marks Dartmouth’s sixth working with QuestBridge, an organization that matches exceptionally talented low-income students with colleges and universities across the country.

“Kristen’s and Grant’s stories are just two examples among many of how Dartmouth is truly accessible to high-achieving students of all backgrounds,” says Laskaris.

The map shows the regions in the U.S. where admitted students live. Percentages are: 26.9 from the West; 22.8 from the Mid-Atlantic; 19.3 from the South; 13.1 from New England; and 9.3 from the Midwest. (Illustration by Richard Clark)

The admitted students include almost 8 percent who are the daughters and sons of Dartmouth alumni.

The Admissions Office will host Dimensions of Dartmouth during April for students admitted through regular decision. These one- or two-day on-campus programs, designed to introduce students to the array of opportunities Dartmouth offers, will take place on April 10, April 15, and April 23-24; admitted students are invited to choose the program that works best with their schedules. A plan-your-own-visit option is also available.

Date
5/12/2021
Body
Dartmouth has expanded its commitment to help students from middle-income families, ensuring full-tuition scholarships without loans for...
Articles

Date
4/06/2021
Body
Dartmouth has offered admission to a broadly diverse Class of 2025 in a second pandemic admissions cycle that attracted an all-time record...
Image
Thumbnail 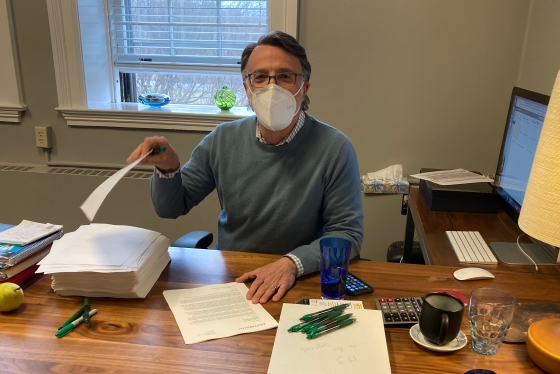