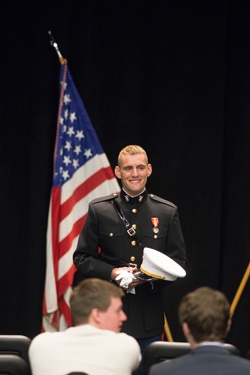 Zachary Moskow ’14 is now a second lieutenant in the U.S. Marine Corps. (Photo by Eli Burakian ’00)

Zachary Moskow ’14 began his path to the U.S. Marine Corps the summer after his first year at Dartmouth, when he attended the first segment of Marine Corps Officer Candidate School. After graduating from Dartmouth in 2014, Moskow completed the final portion of Officer Candidate School, and he recently returned to Dartmouth for the commissioning ceremony that made official his status as a second lieutenant in the Marines.

The ceremony, which was held Feb. 21 at the Black Family Visual Arts Center, included the swearing of an oath to uphold and defend the U.S. Constitution and the presentation of a Mameluke sword traditionally worn by Marines.

This slideshow shows highlights of this proud day for Moskow and his family.