A Crowd-Funded Game That Takes the Stereotype out of Fantasy

In an unnamed realm, sisters vie to become queen. To show their worthiness to rule, they must strategize how best to serve the people while amassing the finest court—and avoiding boorish uncles, jealous cousins, and other unwanted guests foisted on them by sabotaging siblings. 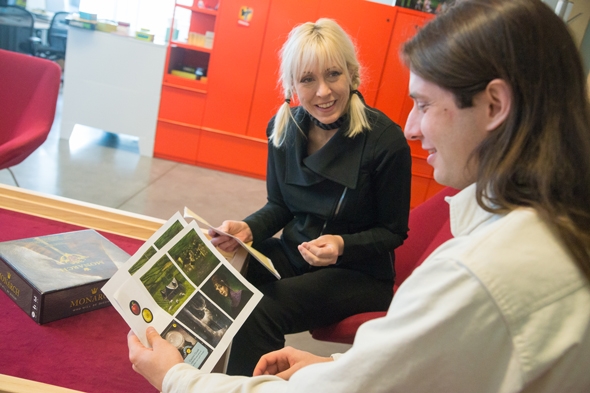 This is the premise of Monarch, a new board game developed by Mary Flanagan, the Sherman Fairchild Distinguished Professor in Digital Humanities. To date, 174 people have pledged to fund Monarch through Flanagan’s first-ever Kickstarter campaign, which she hopes will raise $15,000 by March 14.

Flanagan—who has designed more than 30 games and whose Tiltfactor research lab studies how games can effect social change—says Monarch is a game she’s wanted to create for a long time. “Possibly since I was a child,” she says. She describes how playing a game called Dark Tower as a girl opened up to her the fantastical possibilities of game worlds.

Part of the impetus behind Monarch, Flanagan says, is to encourage more diverse game makers to share their invented worlds. “Games let you cross into a magical, permissive space where you can do things you wouldn’t do in regular life,” she says. “But too few games are created by women. What would those worlds be like? Maybe this will encourage others to put their worlds out there, as well.”

Flanagan describes Monarch as “strategic—but not so strategic that it would be off-putting. I think of this as a gateway between popular games and the kind of heavy German board game that you sit down and play for six hours.” She estimates average playtime at 45 minutes. 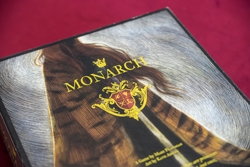 With every turn, players must choose either to tax the land for gold or to harvest food to feed the taxpayers. They can purchase land improvements, such as a windmill, to increase their tax base, and collect accoutrements of power—ceremonial gowns, exotic animals, or wise advisers. Muster enough of these and the game ends, but players still need to tally their points to determine the new ruler. Unwanted guests subtract points. (The first five backers who gave $399 or more to the Kickstarter campaign will find their faces on unwanted-guest cards—Flanagan says these will include Dartmouth faculty members and “some very famous game designers.”)

The game features the scratchboard artwork of illustrator Kate Adams. “The art draws people in, opens people up,” says Flanagan. “It doesn’t have a link to pop culture. It’s its own flavor.”

The primary characters of Monarch are female, but you won’t find stereotypical princesses. “I wanted to try to do princess without doing ‘princess.’ The word is so loaded,” says Flanagan. “It conjures pink, Disney—everything but what I want it to conjure, which is promise, potential, responsibility. If you look at stories of queens historically, you know princesses have a very heavy role. If you’re positioned as sisters, you have a different sense of culture and who the other players are.”

She hopes Monarch will be enjoyed by both girls and boys. To make sure it will, her Tiltfactor team staged play tests with boys throughout the Upper Valley. In one study, a group was told upfront that its members would be playing the game as sisters, while another group learned the gender of its characters several moves in.

At first, Flanagan says, the second group appeared to take the revelation badly. “They were like, ‘Sisters? What?’ I was afraid that would ruin the game—they’re fighting about who’s a girl, and it’s making them totally self-conscious.” 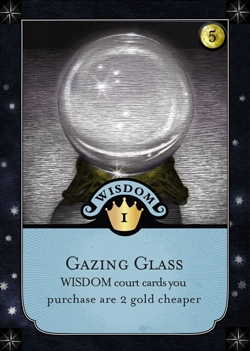 But analysis of the research showed otherwise. For the players who experienced the delayed reveal of their character’s gender, “We found that they actually enjoyed the game more—they had higher levels of ‘experience taking,’ and they categorized the game as more appealing for a wide audience.” In contrast, the group that knew about gender upfront was more apt to characterize the game as for girls.

These findings led Flanagan to make the packaging more gender neutral. “The instructions will say ‘siblings,’ just to make sure that delayed reveal happens for everybody. I want it to be approachable for boys as well.”

For Flanagan, running a Kickstarter campaign has been a learning experience. “I’m ready to try new ways to communicate novel ideas as a professor, having done this. I believe I can talk to students about how new models of engagement such as Kickstarter really work.”

Flanagan’s interest in entrepreneurship is based on a desire to have an impact on the world. “How can all this research reach real people? These games that change people’s minds—it’s my responsibility to get them out there. There’s an interesting set of models here for the scholar-entrepreneur about how we scale critical thinking and scholarship in the humanities.”

And perhaps Monarch will spark a young person’s imagination the way Dark Tower sparked hers. “There are these things that inspire us at the right place and the right time,” she says. “I’m hoping this will reach someone and have that real change happen.”