Dartmouth Idol Alumni: Where Are They Now?

Tara Joshi ’18 was crowned the winner of Dartmouth Idol 2015 at the March 6 finale. Now in its eighth year, the annual event allows students to compete for a $500 prize and the opportunity to produce a two-song demo with Walt Cunningham, Dartmouth Idol’s founder and music director. 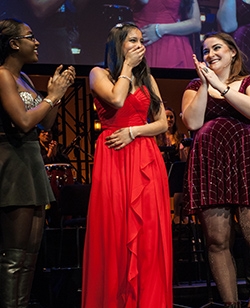 Tara Joshi ’18 reacts to the announcement that she has won this year’s competition. (Photo by Kwame Ohene-Adu ’14)

Beyond the prizes, it’s a way for students to learn about the hidden talents of their classmates. Several finalists from previous years have gone on to use their vocal skills well beyond the Green.

Michael Odokara-Okigbo ’12 may be the alumnus whose life was most dramatically changed by Dartmouth Idol. When he entered Dartmouth as a first-year student he was thinking of going into real estate investment banking, but his path took an unexpected turn when he won Idol in 2009.

Odokara-Okigbo, who now goes by the stage name Michael O., says Idol “was the first music competition I ever entered, and it set me on the path to becoming a professional musician.” He went on to lead the Dartmouth Aires to a second-place finish on NBC’s The Sing-Off, is now working on his debut album, and has a role in the upcoming film Pitch Perfect 2. Without Dartmouth Idol, Odokara-Okigbo says, none of this would have been possible. “I’ve found what I wanted to do, and Dartmouth was a huge catalyst for that.”