Read the full story by Susan Green, published by the Geisel School of Medicine.

Ten minutes into an hourlong solo performance at Lincoln Center, Philip Montana pulls his hamstring doing a kick to the right. With no option to end his performance, a silent mantra of “I can do this” loops through his thoughts and convinces him that the second kick won’t be too bad. He kicks—and nearly faints from the pain. 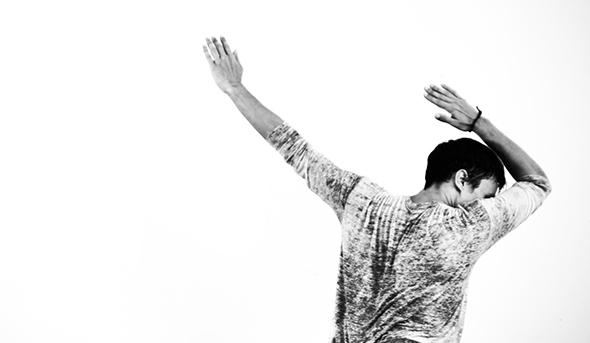 “I’ve spent much of my professional life scrutinizing the body—it’s what you do in dance. Looking at people is your job,” says first-year medical student Philip Montana. “I want to be able to make a difference, to help someone with injuries see an immediate result.” (Photo by Miguel Anaya)

“Had I been performing with a group, I could have left the stage and nobody would have noticed, but I had to keep going and I had to do the same kick at the end of the show,” the first-year Geisel School of Medicine student recalls.

Dance. It’s a rigorous discipline that requires mental acuity and physical control. Professional dancers are expected to be in great shape and most have a personal regimen designed to sustain their strength and endurance and to ward off injuries. Daily workouts complement two-hour dance class warm-ups prior to exhaustive five-hour rehearsals five days a week. “The most difficult thing about being a professional dancer is the maintenance,” Montana says. “Without it, it’s too easy to injure yourself.” Even with it, there are no guarantees.

For Montana, dancing professionally full-time with a variety of companies, including New York City-based Shen Wei Dance Arts, took its toll. After years of performing, Montana experienced chronic pain in his lower back and shooting pain down one of his legs. The culprit—piriformis syndrome, a compression of the sciatic nerve by the piriformis muscle, a muscle that plays an important role in lower body movement and in maintaining balance.

Although his injuries weren’t career ending, they did shape his future. Being injured more frequently than he was not, Montana stopped dancing professionally in order to preserve his health and turned his attention to teaching. It was a difficult decision for someone who had been dancing since high school, who has a master’s degree in dance performance from New York University’s renowned Tisch School of the Arts, and who established his own dance company. Teaching would keep him connected to what he loves.

While training dancers in New York City, teaching Pilates to people recovering from injuries, and rehabilitating his own injuries, Montana had an epiphany—he wanted to become a physician. It was a natural choice fueled by an early interest in science and a desire to help those with injuries. Dance is important because it contributes to art and culture, but it doesn’t really help anyone, it’s ephemeral, he says. And Montana wanted to help injured dancers.