When Associate Professor Jennifer Lind uncovered references to a little-known incident involving Robert F. Kennedy during his 1962 diplomatic visit to Japan, she had no idea where it would lead her.

A year and a half later, Lind flew to Japan, at the invitation of U.S. Ambassador to Japan Caroline Kennedy, to take part in a conference where former President Bill Clinton, Japan’s Prime Minister Shinzo Abe, historians, and diplomats honored President John F. Kennedy’s legacy in U.S.-Japan relations. 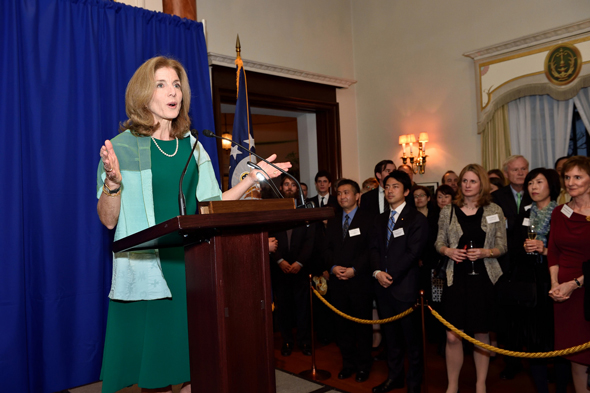 The symposium, “The Torch Has Been Passed: JFK’s Legacy Today,” honored the legacy of John F. Kennedy in the areas of civil rights, science and space, and foreign policy. The symposium was held at a Waseda University auditorium that Lind’s research showed to be highly significant in U.S.-Japan relations. 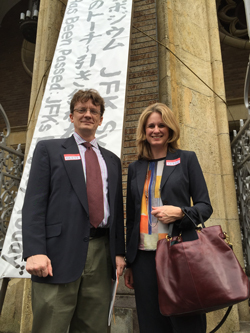 In a 2013 article, Lind, an associate professor of government, described a dramatic incident in which Robert F. Kennedy quelled a near riot involving student protesters in Okuma Auditorium. Kennedy’s respectful exchange with the protesters and his calm command of the crowd ended with Kennedy and his wife, Ethel, joining the students of Waseda in singing the school song as the event was broadcast live across Japan.

Lind says the RFK visit helped solidify U.S.-Japan relations at a time when the relationship was precarious. The John F. Kennedy Library Foundation and Ambassador Kennedy, the daughter of President Kennedy, organized the March 18 symposium at Waseda University, with remarks by Kennedy, Clinton and Abe in the very auditorium where Robert Kennedy met the student protesters.

During his speech in Okuma Auditorium, Abe read the lyrics to the Waseda school song, joking that his aides had begged him not to actually sing. Abe recounted the inspiration of Robert Kennedy’s visit, noting that one of the Waseda students present that day, Keizo Obuchi, went on to become prime minister of Japan.

In conjunction with the symposium, the National Archives of Japan and the JFK Library organized an exhibit on the life and legacy of John F. Kennedy. It is the Boston-based JFK Library’s first international exhibit.

Lind presented her work on the Robert Kennedy visit to symposium participants on March 16 and toured the archive exhibit.

“I had so much fun talking with the curators, and was thrilled when they told me that they relied heavily on my research for the portion of the exhibit on the RFK visit, as well as for the audio tour they created,” Lind says. “This was so gratifying: Most of the time my research is so abstract, and I’m never sure when and how it is informing policy. Here I felt that my research was directly reaching people.”

Lind says her research on U.S.-Japan reconciliation during the Kennedy era “was originally a tough sell to editors.”

“I was astonished when, a few months after the article was published, Caroline Kennedy was nominated to be ambassador to Japan,” she says.

Shortly after the article appeared in National Interest, Lind participated in a panel discussion at Boston’s JFK Library along with Kathleen Kennedy Townsend, Robert and Ethel Kennedy’s daughter, and others about the Kennedy legacy in Japan.