Ahead of most of the country, the audience at the Hopkins Center for the Arts will see an alumnus’ new English adaptation of Mozart’s The Marriage of Figaro that has won rave reviews in New York and Los Angeles and is poised for even wider exposure. Reviewers have praised the show for its audacious and broadly accessible approach to the classic opera. 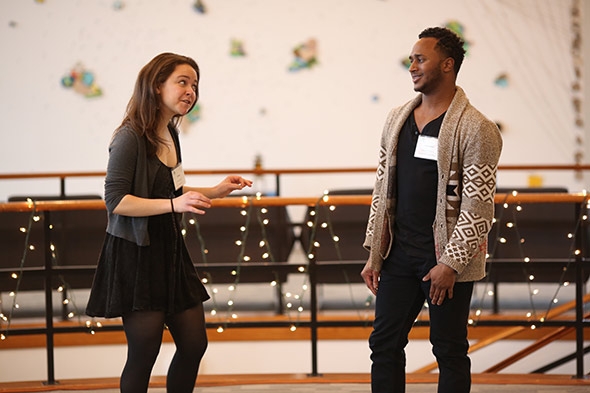 Emma Orme ’15 and Nathaniel Graves ’13 perform a scene from “¡Figaro!” during an event for Hopkins Center members on March 25. (Photo by Rob Strong ’04)

¡Figaro! (90210) comes to the Hop at 7 p.m. on Thursday, April 9, and at 8 p.m. on Friday, April 10, in Spaulding Auditorium, with a cast including favorite singers from Dartmouth, Lebanon, N.H.-based Opera North and beyond—and direction by Melissa Crespo, who directed the New York and California productions. The musical director for the Hop show is Louis Burkot, director of the Dartmouth College Glee Club and artistic director of Opera North.

In his adaptation, the Los Angeles-based Vid Guerrerio ’96 recasts the title character as an undocumented worker in a present-day Beverly Hills mansion, lorded over by a real estate mogul and his pampered wife.

A concert version by New York’s Morningside Opera in 2013 drew raves from The New York Times (“blasphemous, brilliant ... both realistically contemporary and timelessly comic”)and The New York Post (“remakes The Marriage of Figaro into a comedy as relevant as CNN and as sexy as an episode of Revenge”). This acclaim led to a fully staged production in January by LA Opera that The International Review of Music called “hilarious, timely, and heartfelt. … Guerrerio tackles issues of immigration, assimilation, racism, political correctness, capitalism, and liberal and conservative politics with a heady mixture of intelligence, compassion, wit, and slapstick.”

The roles of Barbara, Li’l B-Man, Soon-Yi Nam, and Babayan, are played by four young Dartmouth singers: Emma Orme ’15 (who had lead roles in Dartmouth productions of Spring Awakening and In the Next Room: The Vibrator Play); Nathaniel Graves ’13 (a past winner of Dartmouth Idol, a soloist with The Dartmouth College Glee Club, the Dartmouth College Gospel Choir, and Maximilian in the Glee Club’s 2013 production of Candide); Olivia Kang (a doctoral candidate in psychological and brain sciences and an active singer in Dartmouth chamber music); and Tyler Putman ’09 (a busy New York-based singer who has performed with opera companies around the country and recently made his Off-Broadway debut, and whose frequent Dartmouth performances include bringing down the house as Pangloss in the 2013 Candide).

The idea came to Guerrerio in the wake of 2008’s economic meltdown, he told The Hollywood Reporter. Walking down Hollywood Boulevard one day while listening to Mozart’s score, he found himself thinking about the 1 percent, Occupy Wall Street, immigration reform, and ethnic diversity. This thought struck him, he said, that “The Marriage of Figaro isn’t about something in the past, it’s about human existence, it’s about human life. No matter what time period you’re looking at, these are the struggles that we’re dealing with as we interact with each other.”

Burkot said Guerrerio specifically requested that singers’ ethnicity match that of their roles, and that mature singers play the developer and his wife. Accordingly, the Contis are played by New York-based professional Lee Velta, a veteran of more than 40 opera roles; and Erma Mellinger, a Dartmouth voice teacher and vocal coach to the Handel Society of Dartmouth College who has sung with opera companies around the nation, as well as with Opera North.

Figaro and Susana are played by two young New York-based singers: Javier Ortiz, an Opera North Young Artist in 2014 who also appeared in last December’s Amahl and the Night Visitors, and Candace Lynn Matthews, who will play Maria in Opera North’s West Side Story this summer.

Guerrerio said he hopes the Dartmouth production will draw out his version’s educational themes, and be seen by students interested not only in music and theater but also such topics as wealth distribution, immigration, Latin American studies and more. “The New York and LA productions proved the show’s entertainment value, as a work that can make people laugh and also think. At Dartmouth, I hope we can draw out the many academic connections that can be made. For that to happen at a college like that, with an international scope, would be a great development for the show.”