Thousands of people will gather this weekend in Selma, Ala., to mark the 50th anniversary of Bloody Sunday, the Selma-to-Montgomery March, and the Voting Rights Act of 1965. Professor Susannah Heschel will be there, honoring the memory of her late father, Rabbi Abraham Joshua Heschel, who joined Martin Luther King Jr. on the march. 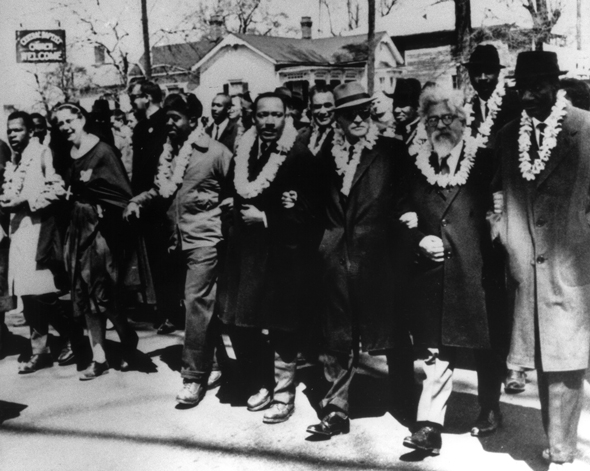 Heschel, the Eli Black Professor of Jewish Studies in the Department of Religion, has accepted an invitation from Selma Mayor George Evans to receive an award on behalf of her father at the 50th Anniversary Commemoration Awards Ceremony and Dinner on Friday, March 6.

“The religious inspiration that led us to Selma continues, and the photograph of my father marching in the front row there—with King, Ralph Bunche, John Lewis, Rev. Fred Shuttlesworth, and Rev. C.T. Vivian has become iconic.  … The photograph reminds us that religious coalitions can transcend and overcome political conflicts, and it also reminds us that our Jewish prophetic tradition came alive in the civil rights movement. Judaism seemed to be at the very heart of being American,” writes Heschel in an opinion piece published Jan. 18 in the Jewish Daily Forward.

Heschel will speak at an event on March 8 at the Jackson House Museum, the former home of Dr. and Mrs. Jackson, who welcomed Dr. Martin Luther King Jr. and other civil rights leaders to use their home as a base to formulate the voting rights campaign in America.

Also on Sunday, Heschel will speak at a small synagogue, Congregation Mishkan Israel in Selma, addressing the large contingent of Jewish participants expected at the commemorations this weekend.