Rockefeller Leadership Fellows, past and present, talk about the program as a launch pad for life after Dartmouth.

The yearlong seminar-style RLF program was established by the Nelson A. Rockefeller Center for Public Policy and the Social Sciences nearly 15 years ago to further the center’s founding mission of educating, training, and inspiring the next generation of public policy leaders. 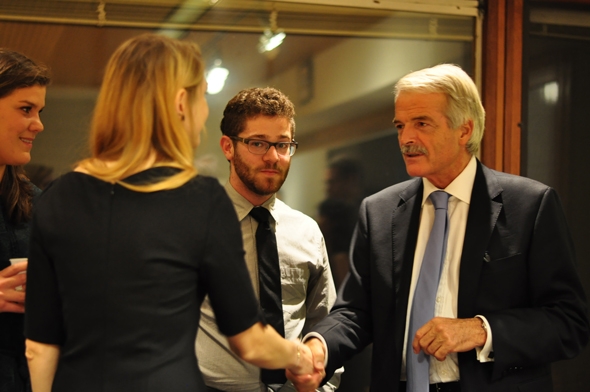 The Rockefeller Leadership Fellows program accepts a select number of Dartmouth seniors with demonstrated leadership experience and provides them with the opportunity to dig deeply into leadership topics such as establishing credibility, negotiation, influence, adaptation, and achieving goals as a team, says Sadhana Hall, deputy director of the Rockefeller Center, who has designed and developed the program for the past 10 years.

“Effective leaders must have a clear vision of the values, skills, and experiences that shape their thinking and actions,” says Hall. By participating in RLF for a full academic year, participants are able to hone their management and leadership skills while still in their current on-campus leadership positions, and then take those valuable experiences away with them upon graduation, Hall says.

There is plenty of evidence to support the idea of the program as a launch pad.

In the past two years, for example, three students from the program have been named Rhodes Scholars. Miriam Jerotich Kilimo ’14, an RLF alumna from Nairobi, Kenya, was named a Rhodes Scholar for 2015. She was encouraged to apply for the scholarship by Joseph Singh ’14, also an RLF alum and a 2014 Rhodes Scholar. Current Leadership Fellow Colin Walmsley ’15 was also selected as a 2015 Rhodes Scholar.

Says Kilimo of her Rhodes interview process, “I credit my experiences at RLF—the public speaking, etiquette training, interaction with high-profile speakers, and even interactions with fellow RLF-ers—for giving me the confidence to defend myself before the panel of interviewers.”

Each week, the program allows students to interact with leaders in many fields, and gives fellows a chance to reflect on their goals for the future. Through interactive sessions, these professionals present fellows with management and leadership challenges and work with them to come up with creative solutions. Fellows then reflect on the applicability of the lessons they have learned during the sessions to their own lives.

Speakers this academic year included Sir Malcolm Grant, chair of England’s National Health Service and a Montgomery Fellow; Nate Fick ’99, chief executive officer of Endgame Inc. and a Dartmouth trustee; and Alison Fragale ’97, a professor of organizational behavior at the University of North Carolina’s Kenan-Flagler Business School and a member of the Rockefeller Board of Visitors. 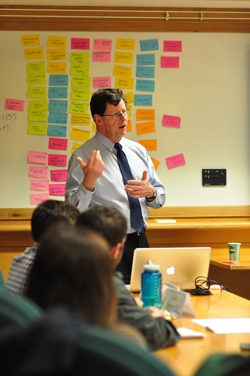 Fick, who served as a Marine Corps infantry and reconnaissance officer after graduating from Dartmouth, has headed Endgame, a cyber-security software company, for three years and was previously CEO of the Center for a New American Security, a national security research organization. He served on the board of visitors of the Rockefeller Center and has been a featured presenter for RLF for nearly a decade.

His views on leadership grow out of the hands-on experience as a Marine Corps officer, the more cerebral pursuits of a Harvard Business school student, and the lessons learned from running two companies, Fick says.

“I have a very strong view that leadership is absolutely learned, but it’s not only taught,” he says. “So didactic learning matters; and experiential learning matters. And it all has to be participatory in nature. I think the Rockefeller Leadership Fellows program does exceedingly well at integrating these aspects of leadership education.”

Says Hall, “Equally important to the conversations with successful professionals and academics is the opportunity RLF creates for fellows to reflect on their personal and professional values, craft their own leadership philosophy, and develop skills. Many RLF alums, like Kilimo and Walmsley, feel that the program has helped them to build professional contacts, and to develop their leadership capacities.”

Nikki Sachdeva ’15, a government major with a minor in public policy and art history from Plano, Texas, says an important part of the RLF experience for her has been getting to know a wide cross-section of student leaders as they forged a team under Hall’s guidance. Also, having personal access to such a variety of innovative thinkers and national leaders was invaluable to clarifying her own career aspirations, Sachdeva says.

“Each week we walk away from the RLF encounter with a salient leadership theory or method that we can then apply to our own life. And what I really appreciate is that we tie in those theories or methods into our own efforts with organizations on campus or in the workplace,” she says.

It was an RLF presentation by Associate Professor of Engineering Peter Robbie in the fall that helped Sachdeva crystalize her decision to pursue a career in social design, she says. Sachdeva went on to take Robbie’s “Design Thinking” class at Thayer School of Engineering. Sachdeva describes her ambitions in social design as “a combination of industrial design, engineering, and art, but designed for those in society who need it most.”

Fick says the Rockefeller Center and the Rockefeller Leadership Fellows program is “integral to Dartmouth’s mission of training and preparing leaders to go out and make a difference in the world.”

And he says the RLF undergraduates come to the program with “the right stuff” to become leaders.

“I think they’re awesome. That’s why I keep coming back. I’ve spoken to them for close to 10 years, and I always look forward to making the trip,” Fick says. “They’re eager to hear, eager to listen, eager to talk and to share, eager to learn, and I find it incredibly energizing.” 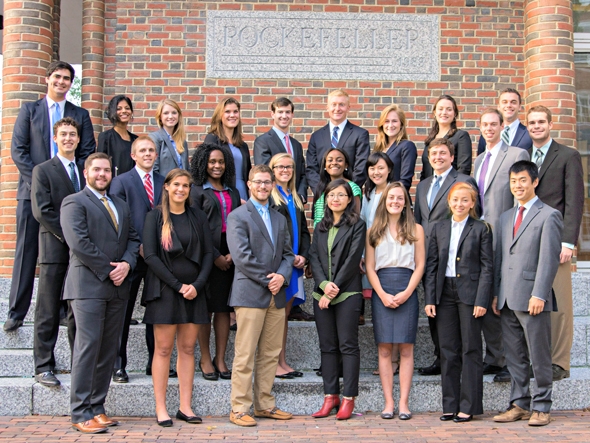 The spring term brings with it one of the largest experiential learning aspects of the program; Current fellows participate in the selection process for the next year’s fellows. Students from all majors are eligible to apply during their junior spring. Applicants are judged on their resume, a statement of interest, faculty and peer recommendations, and interviews conducted by current fellows.

“During the interview process, we are looking for evidence that the student is an individual who exercises both hindsight and foresight and who will not only gain from the program, but contribute to it,” says current Leadership Fellow John Howard ’15.

“The time and energy commitment to RLF is significant. Potential participants need to realize that they are committing to this experience not just for themselves, but for the other fellows in the program as well,” Howard says.

By taking part in selecting their successors, the fellows learn about professionalism and develop effective teamwork skills, Hall says. “And they reflect individually and collectively on management and leadership principles discussed throughout the program.”