Read the full story by Jennifer Wulff ’96, published in the March/April 2015 issue of Dartmouth Alumni Magazine.

If you’re thinking of asking Shonda Rhimes ’91 for any favors, you had better act fast. Because after the TV mogul gives a talk at March’s TED conference in Vancouver, her “year of yeses,” as she calls it, is coming to a close. The dare started around Christmas of 2013, when her sister, Delorse, chided Rhimes for turning down too much. “So my New Year’s resolution was to say yes to the things that scare me,” says Rhimes. The first call she got happened to be from President Phil Hanlon ’77, who asked her to give Dartmouth’s 2014 Commencement speech. “I thought, that sounds terrifying!” says Rhimes. “I don’t like public speaking, so to give the Dartmouth commencement speech? That’s insane. As soon as I hung up the phone, I was like, I can’t believe I said yes to that!” 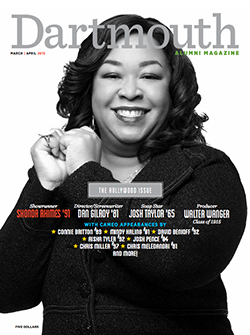 Ushered past the ShondaLand sign on the wall of her production company’s waiting area, one feels lucky to be on the other side of one of those yeses. Agreeing to an interview with DAM, Rhimes is open and warm as she settles in for a chat in one of the comfy chairs in her large but homey office at the Sunset Gower studio lot in Hollywood in early December. “This used to be Warren Beatty’s office,” she says. “I think he’d like that a chick is in here now.” This isn’t just any chick, though. As the creator of the smart, sexy medical drama Grey’s Anatomy and the fast-paced political thriller Scandal and the executive producer of the law school whodunnit How to Get Away with Murder, her name is now behind the entire ABC Thursday night lineup, helping the network win its highest ratings in five years. As the headline on her recent Hollywood Reporter cover put it: “This Is TV’s Savior.”