Thayer School of Engineering Is Part of White House Initiative

Thayer School of Engineering is among more than 120 U.S. engineering schools leading a transformative movement in engineering education that was announced at the White House today. 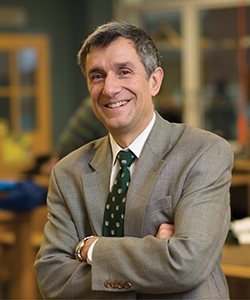 In a letter presented to President Barack Obama, Dartmouth and peer institutions committed to expand their educational offerings to prepare undergraduates to solve ”Grand Challenges“—complex yet achievable goals to improve national and international health, security, sustainability, and quality of life in the 21st century. Together, the schools plan to graduate more than 20,000 formally recognized ”Grand Challenge Engineers“ over the next decade.

”The Grand Challenges initiative builds on long-standing strengths of engineering at Dartmouth: project-based learning; engineering as part of a liberal arts education—what we sometimes call ‘liberal engineering’; and an emphasis on innovation and entrepreneurship—for which we are among the national per capita leaders,“ says Thayer’s Dean Joseph Helble.

”It is exactly this combination that resulted in Thayer being recognized with the Gordon Prize for educational innovation by the National Academy of Engineering in 2014. As a next step, we are committed to this national initiative to produce more engineering leaders able to address some of the world’s most challenging problems in energy, health care, and other areas of need."