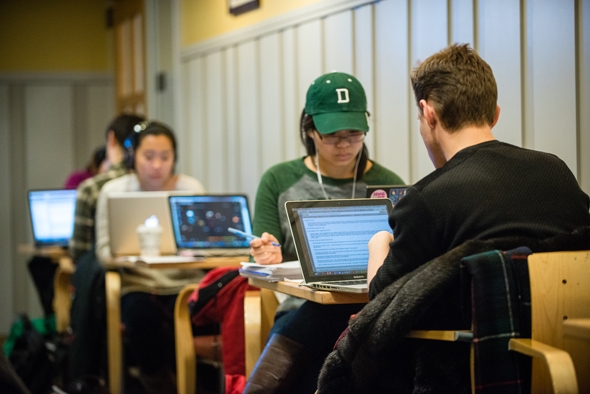 As the winter term comes to a close, students are preparing for finals, which begin March 13. (Photo by Jeff Woodward)

Thursday, March 12: Damon McCoy of George Mason University will speak on “Data-Driven Security: A Socio-Economic Approach to Disrupting Cybercrime,” at a computer science colloquium at 4:15 p.m. in Carson L01.

Friday, March 13: Kieran Setiya of MIT delivers the next installment of the philosophy department’s Sapientia Lecture Series at 3 p.m. in 103 Thornton Hall.

Friday, March 13: Dartmouth’s Robert Caldwell offers a physics and astronomy colloquium on “Echoes of the Big Bang” at 3:30 p.m. in Wilder 104.

Friday, March 13: Thayer School of Engineering presents a series of special seminars to be held in Cummings 200, beginning with Bruce Vojack, from the College of Engineering at the University of Illinois at Urbana-Champaign, for a seminar titled “Serial Innovators: How Individuals Create and Deliver Breakthrough Innovations in Mature Firms.” His talk begins at 3:30 p.m. on Friday, March 13. Scott Davis, a Thayer and Norris Cotton Cancer Center researcher, on “Multi-Agent Optical Imaging: Realizing the Potential of Molecular Imaging with Optics.” Davis’s presentation starts at 4 p.m. on Monday, March 16. And on