The season continues for a number of Big Green winter sports this week as 10 skiers are set to compete at the 2015 NCAA Men’s and Women’s Skiing Championships, the men’s ice hockey team heads to Colgate for the quarterfinals of the ECAC Tournament, and the men’s basketball team prepares for the CIT Tournament. 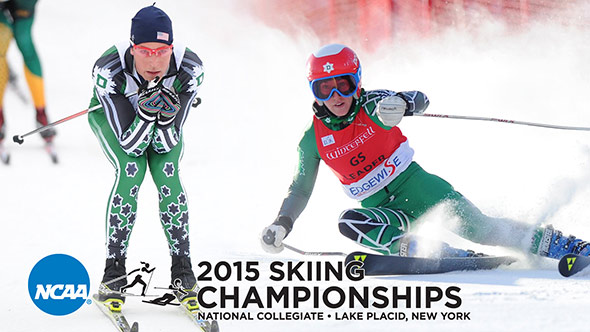 Patrick Caldwell ’17, left, and Foreste Peterson ’18 are two of the 10 Big Green skiers who will be competing at the NCAA National Championships this week. (Courtesy of Dartmouth Athletics)

Men’s Hockey Set to Take On Colgate in ECAC Quarterfinals

After defeating Princeton in the first round of the ECAC Hockey Tournament, the Big Green now turns its attention to the quarterfinals against Colgate. The Big Green defeated Princeton by scores of 3-2 and 2-0 in the best-of-three series last weekend.

Dartmouth, the tournament’s fifth seed, heads to Colgate to take on the fourth-seeded Raiders in a best-of-three series that begins Friday, March 13.

For the first time in 56 years, the Big Green men’s basketball team is headed to the postseason. Head coach Paul Cormier announced that the team received and accepted a bid from the CollegeInsider.com Tournament (CIT).

The CIT field will be announced on March 15, following the selection show for the NCAA Tournament.