As California faces one of the most severe droughts on record, Jason Dadakis ’99 is on the front line of the battle for water supply. He was about to land in New York on April 1 when he heard that Gov. Jerry Brown had issued an executive order mandating statewide water restrictions for California. By chance, Dadakis was to be in Hanover the next day to give a guest lecture on groundwater management and potable reuse at Thayer School of Engineering. 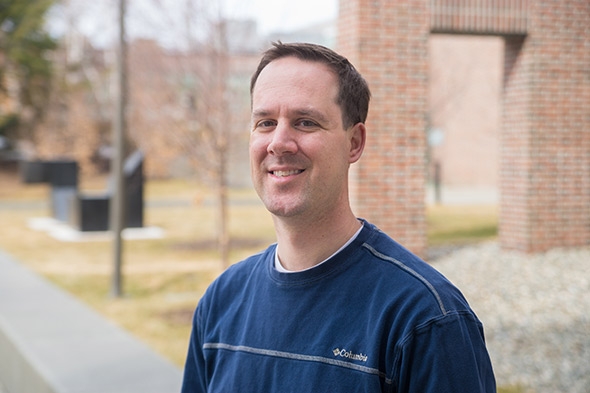 “The governor’s declaration is unprecedented,” says Dadakis, the director of health and regulatory affairs for Southern California’s Orange County Water District (OCWD). “California has been through tough droughts before, but not quite as long as this and not quite as severe. It has been this bad for four years, and eight of the last 10 years have been well below average.”

As an undergraduate, Dadakis worked with Professor of Earth Sciences Carl Renshaw, who is also an adjunct professor at Thayer School of Engineering. Based on experiments conducted in Renshaw’s laboratory, Dadakis wrote his senior thesis on the flow of groundwater through fractured rock, studies that serve him well in his work at OCWD.

Serving a population of more than 2.4 million, OCWD operates the world’s largest recycled potable water operation, known as the Groundwater Replenishment System (GWRS). “The name tells you a lot about what we do,” says Dadakis.

Groundwater depletion is a worrisome concern in times of drought. The United States Geological Survey (USGS) reports that in the U.S., groundwater is the source of drinking water for about half the total population. In times of drought, excess pumping from wells endangers the long-term sustainability of the subterranean aquifers that hold the groundwater, according to USGS. 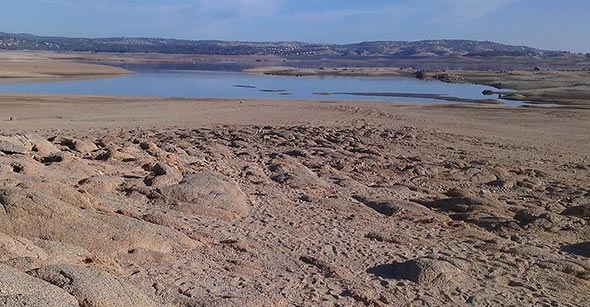 Folsom Lake Reservoir, one of California’s most popular recreation areas, shows the effect of the drought in this 2014 image. Much of the dry land around the lake was under water before the drought. (USGS Image by David Pratt)

“What we have been doing in some form since the 1970s is putting highly purified recycled water back underground,” says Dadakis of the work of OCWD. “For the last eight years, our plant has been generating 70 million gallons per day of purified recycled water from treated sewage or wastewater obtained from the neighboring Orange County Sanitation District (OCSD). After it has gone through traditional sewage treatment processes, we purify it the point where it meets or is superior to drinking water standards and pump it back into the ground.”

Dadakis says that an expansion of GWRS is about to go online that will bring plant capacity up to 100 million gallons, enabling the facility to meet 20 to 25 percent of OCWD’s demand via aquifer replenishment with recycled water.

Other places in California are considering doing similar projects. “San Diego has embarked on a similar program, implementing a long-term plan to use the same technology we use but to augment an existing reservoir,” says Dadakis. “The highly purified recycled water would mix with the reservoir water, and then go through traditional drinking water treatment filtration and become part of the water supply.”

He says Southern California has made significant infrastructure investments in storage so as to make use of the wet years better and not allow water to just to run off into the Pacific. “The state has also invested in projects like ours, in terms of recycled water development. Combined with better conservation, especially in-home uses—more efficient toilets, washing machines, and dishwashers—we have seen an overall drop in urban water demand.”

“I think it is good that the governor is engaged, and he has been for some time. He was instrumental helping the state pass a $7.5 billion water bond last fall that is supposed to bring us more water reliability projects like ours,” Dadakis says.

Taking the broader view of the California drought, Dadakis puts it in the context of global climate change. “Some of the people think what’s happening now does comport with many of the predicted effects of changes in ocean circulation,” he says. “I don’t think we quite know yet in terms of its duration. How permanent is this? Is this the new normal? Nobody knows for certain when this might break, but it is interesting how some of this does appear to match up with what some folks were predicting might occur.”