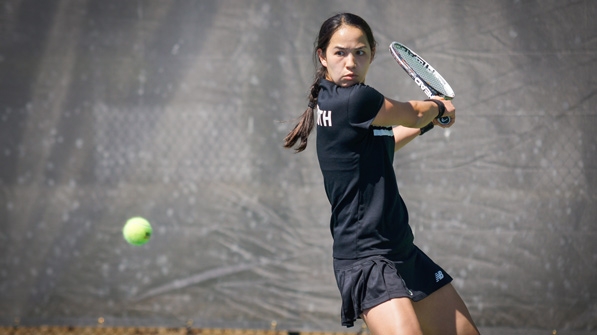 Taylor Ng ’17 was named the 2015 Ivy League Player of the Year. Ng and her Big Green teammates earned an at-large bid to the NCAA Tournament. (Photo by Josh Renaud ’17)

For the first time in program history, the Dartmouth women’s tennis team has qualified for the NCAA Division I Women’s Tennis Championship. The Big Green received an at-large bid, earning a spot in the tournament’s field of 64 teams.

Dartmouth was nationally ranked every week since mid-January, making a 24-spot jump in February from No. 46 in the country on Feb. 17 to No. 22 a week later. The team received its highest ranking to date a week later, sitting at No. 18 at the end of February. The team is currently ranked No. 31 in the Intercollegiate Tennis Association rankings.

The Big Green, which finished the regular season with a record of 18-5, started the spring season with a perfect 11-0 record. The team captured the ECAC title in February and finished second in the Ivy League with a conference record of 5-2.

Dartmouth heads to Chapel Hill, N.C., to face William & Mary on May 9 in the first round of the NCAA Tournament.