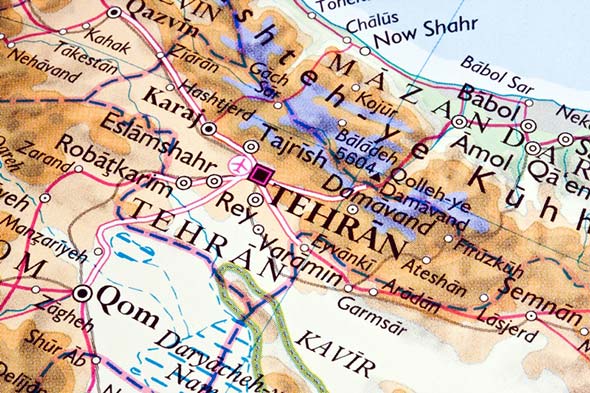 The Dickey Center’s Daniel Benjamin says the agreement limiting Iran's nuclear capability is “real progress,” but cautions that much work remains to be done on the agreement. (Image by Veer)

A short time later, in the Rose Garden, President Obama described as a “good deal” the agreement forged in Lausanne, Switzerland, between Iran and the United States and U.S. negotiating partners France, Germany, the United Kingdom, Russia, and China. The agreement allows for "unprecedented verification," Obama said, and will "cut off every pathway that Iran could take to develop a nuclear weapon."

Daniel Benjamin, the Norman E. McCulloch Jr. Director of the John Sloan Dickey Center for International Understanding, called the announcement "real progress," but says he hesitates to pronounce this a historic event—yet.

"The central points of the agreement all look very positive, but an enormous amount of work remains to be done to nail down all the details, so until we see that, it's hard to have a victory lap," he says.

"Key issues will be inspections above all—how much room the international community will have to examine nuclear sites," Benjamin says. And there remains the tricky matter of satisfying "political leaders on both sides of the aisle in Congress."

As negotiations closed in on a U.S.-imposed deadline of March 31, a number of outside developments further complicated the issues, including an open letter to Iran signed by 47 U.S. Senators and a number of presidential candidates suggesting that any deal could still be scuttled by Congress, and an address to Congress by Israeli Prime Minister Benjamin Netanyahu warning that Iran can never be trusted.

The deal reportedly includes a framework to prevent Iran from producing weapons-grade uranium; sets up international inspections of nuclear facilities; and enforces a one-year "breakout time"— the amount of time it would take Iran to produce enough bomb-grade material for a singular nuclear weapon. In return, the international community would agree to lift the longstanding economic sanctions on Iran.

Steven Simon, who served on Obama’s National Security Council and is a visiting scholar in government at Dartmouth, says a lot remains to be seen. "People are going to be looking at this agreement for its weak points. One of the things Obama didn't go into detail on is the sanctions relief piece of it, and that's generating a lot of anxiety," he says.

Critics warn that if the sanctions are lifted at the beginning of the process, "the Iranians will exploit that, and sanctions will be very, very difficult to reinstate," Simon says. "But remember this agreement had to be sold in Tehran as well, so they are saying this has got to buy us rapid sanctions relief."

The timing of sanctions relief "will be a very fraught issue in the negotiations that complete this agreement," Simon says. But given the broad terms of the deal outlined by Obama Thursday, "it seems rather a good deal. You have to remember that after a decade or more of intensive sanctions the Iranians were up to something like 19,000 centrifuges for enriching uranium, so an agreement of this kind isn't going to do any worse than that. If Iran complies, it will be a lot better because the number of centrifuges will be set a much lower number."

Visiting Professor of Government Bernard Avishai wrote from Jerusalem, where he teaches at the Hebrew University, that reaction to the deal in Israel is cautious.

"The real question Israelis split on is whether Iran's nuclear program is the world's problem to deal with or, finally, Israel's alone," Avishai writes. "And those who see it more as Israel's problem, namely, Netanyahu and his Likud camp, believe that it is too late for a unilateral military strike, which the United States would never have gone along with, anyway."

That is why Netanyahu has tried to rally U.S. Republicans against the deal so that they "increase sanctions, and, if these only make the Iranian regime more recalcitrant, ultimately draw U.S. forces into a military strike in a coalition with Israel," Avishai writes.

"Israelis who oppose this Likud strategy are more like American realists, and want to see the international community act in concert, including drawing Iran closer to the global economy."

Simon sees a chance for the deal to hold, despite the difficulty in ironing out the details. "It seems to me the parties, particularly the Iranians, have an enormous incentive to comply," Simon says. "The talks got this far because both sides were so incentivized to do this, because the alternative ultimately is probably war."