Using an airborne imaging system in Antarctica for the first time, Dartmouth’s Ross Virginia and colleagues have discovered a vast network of unfrozen salty groundwater that may support previously unknown microbial life deep under the coldest, driest desert on our planet. The findings shed new light on ancient climate change on Earth and provide strong evidence that a similar briny aquifer could support microscopic life on Mars. 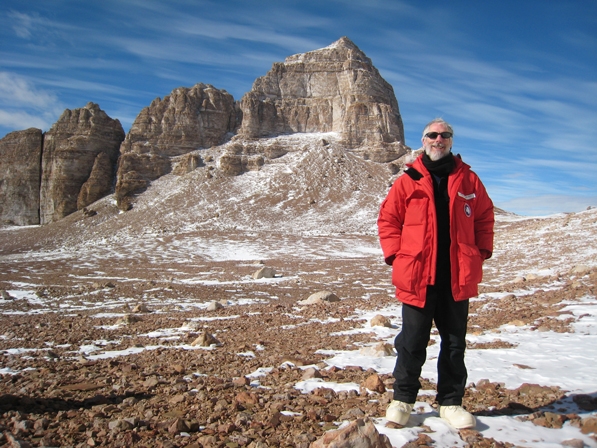 “This fantastic new view beneath the surface will help us sort out competing ideas about how the McMurdo Dry Valleys have changed with time and how this history influences what we see today,” says Professor Ross Virginia. (Photo courtesy of Ross Virginia)

The study appears in the journal Nature Communications.

The scientists used SkyTEM, an airborne electromagnetic sensor, to detect and map otherwise inaccessible subterranean features. The system uses an antenna suspended beneath a helicopter to create a magnetic field that reveals the subsurface to a depth of about 1,000 feet. Because a helicopter was used, large areas of rugged terrain could be surveyed. The SkyTEM team was funded by the National Science Foundation and led by researchers from the University of Tennessee, Knoxville, and Dartmouth, which oversees the NSF’s SkyTEM project.

“This project is studying the past and present climate to, in part, understand how climate change in the future will affect biodiversity and ecosystem processes,” says study co-author Virginia, the Myers Family Professor of Environmental Science and director of Dartmouth’s Institute of Arctic Studies as well as SkyTem’s co-principal investigator. “This fantastic new view beneath the surface will help us sort out competing ideas about how the McMurdo Dry Valleys have changed with time and how this history influences what we see today.”

The researchers found that the unfrozen brines form extensive, interconnected aquifers deep beneath glaciers and lakes and within permanently frozen soils. The brines extend from the coast to at least 7.5 miles inland in the McMurdo Dry Valleys, the largest ice-free region in Antarctica.

In addition to providing answers about the biological adaptations of previously unknown ecosystems that persist in the extreme cold and dark of the Antarctic winter, the new study could help to scientists to understand whether similar conditions might exist elsewhere in the solar system, specifically beneath the surface of Mars, which has many similarities to the Dry Valleys. Overall, the Dry Valleys ecosystem—cold, vegetation-free, and home only to microscopic animal and plant life—resembles, during the Antarctic summer, conditions on the surface on Mars.

Scientists’ understanding of Antarctica’s underground environment is changing dramatically as research reveals that subglacial lakes are widespread and that at least half of the areas covered by the ice sheet are akin to wetlands on other continents. But groundwater in the ice-free regions and along the coastal margins remains poorly understood.