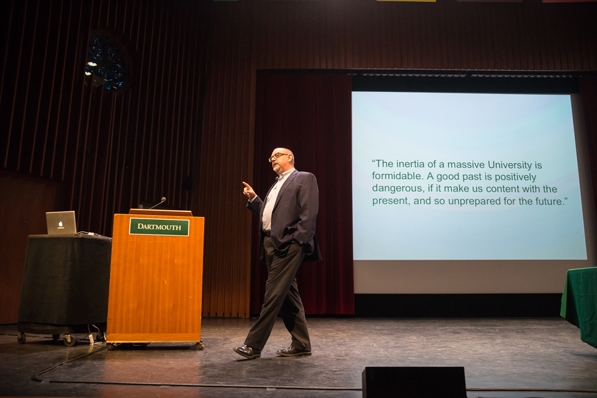 Rauner Special Collections Librarian Jay Satterfield said there are many narratives from the College’s long history, including one about a piece of wood. (Photo by Eli Burakian ’00)

He used a number of examples to illustrate his point: the story behind a shard of wood from the goalpost at the 1935 Dartmouth-Yale football game; a video illustrating the “Red Queen” hypothesis; and a quote from the 1869 inauguration of Harvard President Charles Eliot.

About 125 people gathered in Spaulding Auditorium for the noontime meeting, the fourth in Mills’ series of conversations with the community.

Mills noted that President Phil Hanlon ’77 had spoken about the “Red Queen” hypothesis recently in an address to the faculty, saying higher education is subject to the evolutionary theory that holds that organisms must move as fast as they can to stay in the same place relative to competitors.

“We need to keep moving and keep being great, and that’s hard to do, but it’s even more dangerous to be complacent and say ‘I’m OK where I am,’ ” Mills said. 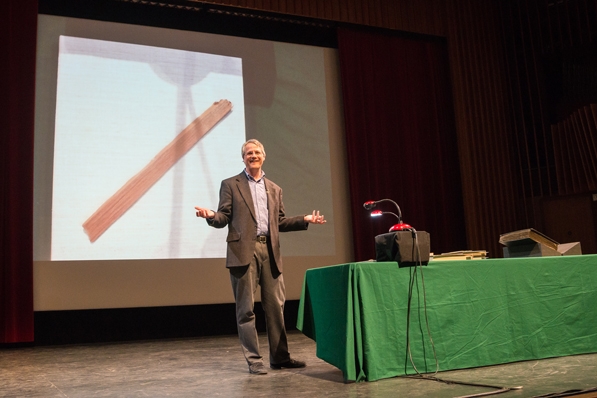 Rauner Special Collections Librarian Jay Satterfield said there are many narratives from the College’s long history, including one about a piece of wood. (Photo by Eli Burakian ’00)

Rauner Special Collections Librarian Jay Satterfield told the story of the Dartmouth-Yale game in what turned out to be an archival performance piece. Satterfield began with a scrap of the goalpost from the 1935 game the student newspaper, The Dartmouth, headlined “Dartmouth Buries Yale Jinx.” Satterfield then followed a 30-year trail of artifacts that pointed to the creation of the Ivy League and Dartmouth’s role in it.

Satterfield said there are countless narratives from the College’s long history. “We can shape those narratives to shape the future as we define it,” he said.

Mills also pointed to a Dartmouth community study being developed to gather information about the campus climate. The College will conduct a survey of students, staff, and faculty in the fall to gather data for the study, said Nariah Broadus, director of strategic initiatives in the provost’s office, who offered an outline of the project during the session.

The challenges of funding research from a constricting pool of government grants and of restraining tuition costs demand rapid and often difficult decisions, Mills said. He said the institution must be open to new sources of research funding, such as foundations and industry, because the “the golden age” of federal funding will not return.

Mills ended by citing Eliot’s 1869 remarks at Harvard, the text of which was projected on a large screen behind the stage in Spaulding as people filed in: “The inertia of a massive university is formidable. A good past is positively dangerous, if it makes us content with the present, and so unprepared for the future.”

Mills will hold the next town hall session on June 10, and then the community conversation series will stop for the summer, starting again next fall.

Being uncomfortable is part of growing. And so I want them to take away this idea we talk about as a ‘brave space,’ that it’s OK to fail and get up. And those are some of the best challenges that you encounter.