Jeffrey James, the Howard L. Gilman ’44 Director of the Hopkins Center for the Arts, will retire this summer after a decade at the helm of the arts center. 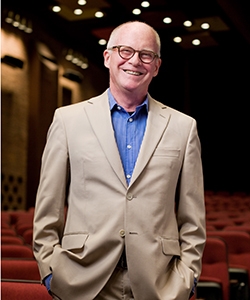 Jeff James’ tenure has included the Year of the Arts celebration in the 2012-13 academic year, which marked the 50th anniversary of the Hopkins Center. (Photo by Rob Strong ’04)

James has overseen a flourishing arts scene that he has had a large part in energizing, says Provost Carolyn Dever. “Dartmouth and the larger arts community in the Upper Valley will miss Jeff’s leadership and creativity,” she says.

James’ tenure has included the Year of the Arts celebration in the 2012-13 academic year, which included the 50th anniversary of the Hopkins Center; student engagement in the arts; Dartmouth arts commissions and endowments; and planning for future expansion of the Hop.

After 40 years of work in the arts and education, James says he’s looking forward to spending more time with family and friends, his dogs, traveling, and working on his own projects. He will leave at the end of summer term.

“I have been immensely proud of the accomplishments we have achieved,” says James. “The Hop’s next leader will find great opportunities as the campus looks to ambitious plans for the future of the Arts and Innovation District and other arts initiatives. I wish them well.

“There is nothing quite like the hushed attention or the standing cheers of an audience in the Hopkins Center. Thank you for many such occasions,” James adds. “It has been a distinct privilege to serve with a creative and hard-working staff, talented student-artists and faculty, and generous volunteers and arts patrons.”

Beginning this fall, Marga Rahmann ’78, associate director and general manager of the Hop, will serve as its interim director while the College conducts a national search for the next director.

James was appointed the sixth director of the Hop in 2005, coming to Dartmouth in August of that year from the Cunningham Dance Foundation, where he had served as executive director. His prior work included senior management, fundraising, and marketing positions at a number of institutions, including the International Foundation for the Canadian Centre for Architecture, the California Institute for the Arts, the Dance Theatre of Harlem, and the New York Philharmonic.