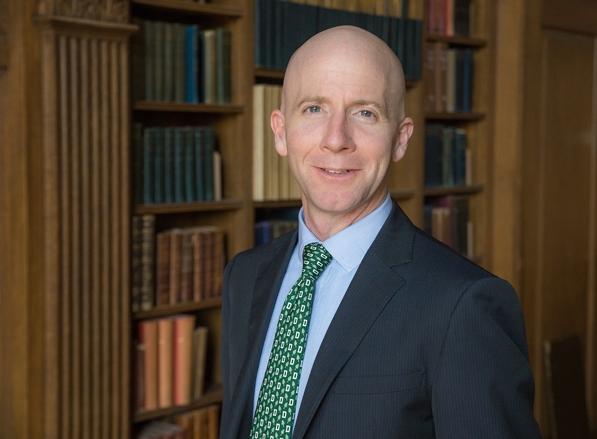 Anderson is a member of President Hanlon’s senior leadership team. He oversees the Office of Public Affairs, which comprises media relations, news and editorial, and creative services teams that tell Dartmouth’s story and share news of the contributions of students, faculty, and staff with the College community and the world.

“Justin has been an insightful, creative, and effective leader since the moment he arrived on campus,” says Hanlon. “His experience in the media world coupled with his impressive track record at Dartmouth make him the perfect choice to lead our communications efforts as we set our sights on distinguishing ourselves in an incredibly competitive world of higher education.”

Anderson says he is honored by the promotion. “Dartmouth is a special place,” he says. “The opportunity to share with an ever wider audience the important, interesting, and innovative work happening throughout the Dartmouth community every day is a thrill and a joy. I’m honored by the president’s confidence in me and proud to work with him and the entire campus to share more broadly what makes Dartmouth a singular and important force in academia.”

Anderson was instrumental in continuing the tradition of bringing presidential candidates to campus with the Bloomberg-Washington Post Republican Presidential Debate in October 2011, during which he coordinated national media coverage of the event.

“It’s a pleasure to work with Justin and his team at the Office of Public Affairs,” says Andrew Samwick, director of the Nelson A. Rockefeller Center for Public Policy. “He brings great enthusiasm and a sharp acumen to telling Dartmouth’s story, both on and off campus.”

Anderson is an organizer of the Dartmouth Public Voices Fellowship, a partnership with the Op-Ed Project that is now in its third year, which supports Dartmouth faculty in extending the reach of their expertise to a wider audience through publication and appearances in mainstream media opinion forums. Nearly 100 op-ed columns by participating faculty have been published since the program began.

“Justin is a stand-up guy who is deeply dedicated to the core mission of Dartmouth,” says Rebecca Biron, a professor of Spanish and comparative literature. “As a faculty member who participated in the Dartmouth Public Voices project, I benefited personally from his expertise and leadership. He is talented, enthusiastic, and genuine—qualities that will serve him well in his new position.”

Anderson also oversaw the planning and launch last month of a weekly radio show on the SiriusXM network called The Briefing Powered by Dartmouth College. Broadcast from campus and hosted by Dean of the Faculty Michael Mastanduno, the show features Mastanduno and guests from the Dartmouth faculty and elsewhere dissecting the history, facts, and perspectives that shape the week’s news.

Tuck School of Business Dean Paul Danos says Anderson is a thorough professional who is proficient in all aspects of academic communications. “I am delighted that someone of Justin’s experience, character, and skill has been appointed to the position of  VP of Communications,” Danos says.

Anderson has served as interim director of the office for several stints, most recently since the departure last fall of Tommy Bruce.

In 2011, Anderson came to Dartmouth to be director of media relations from ABC News in New York City, where he worked as a reporter, an editor, and a senior producer. His work for ABC included coverage of Sen. John McCain’s 2000 presidential primary bid, the devastation in New Orleans caused by Hurricane Katrina in 2005, and management of the network’s coverage of the 2008 presidential election. Anderson was part of ABC’s Emmy and Peabody Award winning coverage of the Sept. 11, 2001, attacks on the World Trade Center.

An honors graduate of Trinity College in Hartford, Conn., with a BA in American studies, Anderson enjoys winter sports and is an avid runner. He has run in the New York and Boston marathons and in local road races. He lives in Norwich, Vt., with his wife, Tamar Schreibman ’90, a writer, and their two young sons, Henry and Ellis.