President Phil Hanlon ’77 and Provost Carolyn Dever announce the reappointment of Michael Mastanduno, an expert in the study of international relations and an award-winning professor, as dean of the Faculty of Arts and Sciences. Mastanduno, the Nelson A. Rockefeller Professor of Government, will serve a two-year term. 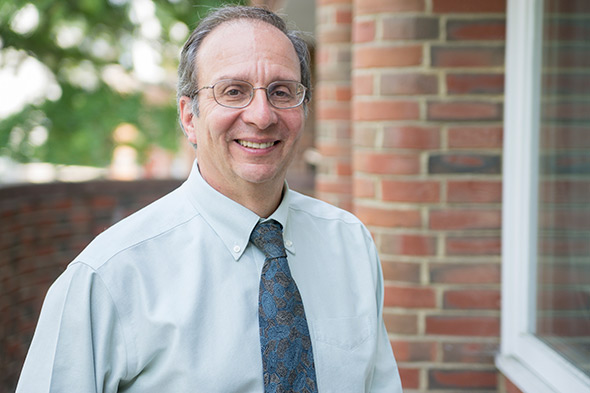 “Dartmouth provides the ideal environment for scholar-teachers to flourish,” says Dean of the Faculty of Arts and Sciences Michael Mastanduno. (Photo by Eli Burakian ’00)

“Mike has been a strong leader and a champion of Dartmouth’s faculty. I look forward to furthering our work together enhancing Dartmouth’s academic excellence,” says President Hanlon.

Mastanduno, who has continued to teach and do research during his deanship, says he’s excited about remaining in the leadership role and working with Hanlon and Dever. He reports to both the president and the provost.

“It’s been a privilege to serve the Arts and Sciences faculty, and to work on President Hanlon’s leadership team as Dartmouth moves into a capital campaign of critical importance to the academic mission,” Mastanduno says. “I also appreciate the president’s willingness to accommodate my plans to return more quickly to full-time research and teaching.”

Dever says, “Mike has been a fine leader of the Arts and Sciences faculty during a time of transition and new development. I am so pleased that he will stay on to lead this faculty into its strategic orientation for the future.”

As dean, Mastanduno oversees the Arts and Sciences divisions—humanities, sciences, social sciences, and interdisciplinary and international programs—as well as graduate studies. The Arts and Sciences faculty is made up of more than 600 members in 40 academic departments and is one of Dartmouth’s four faculties. The others are at the Geisel School of Medicine, Thayer School of Engineering, and the Tuck School of Business.

Mastanduno’s reappointment is welcome news to the faculty, says Frank Magilligan, the Frank J. Reagan ’09 Chair of Policy Studies and a professor of geography.

“The faculty are extremely delighted that Mike Mastanduno has been reappointed. Mike has represented the faculty well at multiple levels, especially with his broad ecumenical view of the liberal arts mission, his skills as a consensus builder, and his far-reaching academic vision,” Magilligan says.

Faculty members had input into Mastanduno’s reappointment in a process that included soliciting faculty and administrative comment through a survey, two forums, and individual meetings with a number of deans.

Mastanduno is an expert in international relations theory, U.S. foreign policy, and the politics of the global economy. His work examines U.S. economic and security strategy in the post-Cold War world and the implications of the rise of China for the world economy and the stability of the international system.

He has published numerous articles in international relations journals, co-edited seven books, and is the author of Introduction to International Relations: Enduring Questions and Contemporary Perspectives and Economic Containment: CoCom and the Politics of East-West Trade. The recipient of Dartmouth’s Distinguished Teaching Award and the Karen Wetterhahn Memorial Award for Scholarly Achievement, Mastanduno lectures widely in policy and scholarly settings in Asia and Europe.

In addition to his research, Mastanduno has continued to teach and advise students while serving as dean. Most recently he taught “Government 54, United States Military and Foreign Policy” this past fall. He also advises students writing honors theses in the government department. His current research is on economic and security relations in East Asia and on the organization and maintenance of international order since World War II.

“Dartmouth undergraduates continually inspire my research efforts, both in terms of the topics I choose and the questions I ask,” Mastanduno says. “Dartmouth provides the ideal environment for scholar-teachers to flourish.”

Last month Mastanduno helped launch a weekly news radio show, The Briefing Powered by Dartmouth College, on the SiriusXM network. The show, which dissects the history, facts, and perspectives shaping the week’s news, features Mastanduno speaking with other scholars, Dartmouth alumni, and guests. The experience, says Mastanduno, has been both enjoyable and rewarding.

“This is an opportunity to showcase the intellectual talent we have at Dartmouth both within Arts and Sciences and across the professional schools. I look forward to each show as an opportunity to bring to a broader audience the kinds of discussions that occur regularly in Dartmouth classrooms.”

Mastanduno has held visiting appointments at the University of Tokyo and at the Graduate School of Economics and International Relations of the Catholic University of Milan. He is a member of the Council on Foreign Relations and has received fellowships from the Brookings Institution, the East-West Center, and the Salzburg Seminar. In 2008 he was a Distinguished Fulbright Lecturer in Japan. Mastanduno also served as assistant for Europe and Japan in the Office of the United States Trade Representative while on leave from Dartmouth in 1989.