New music created by a collective of master musicians from the Nile River Basin flows into the Upper Valley in a weeklong program that includes concerts, a day camp, a museum exhibit, and more. 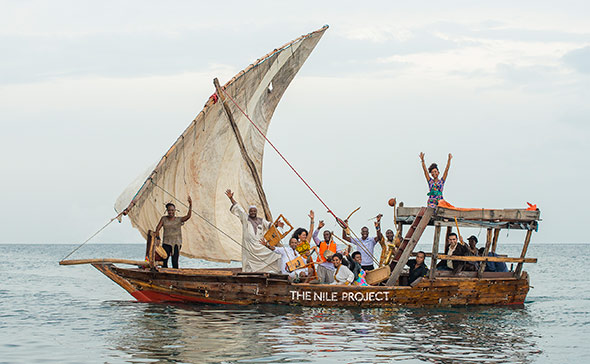 Created by Ethiopian-American singer Meklit Hadero and Egyptian ethnomusicologist Mina Girgis, the Nile Project is meant to pave the way, through music, for greater cooperation among Nile nations on critical issues involving the river. (Photo by Peter Stanley)

Known as the Nile Project, the ensemble performs music that weaves together the pointed melodies and deep grooves of Ethiopia with the Arab classical traditions of Egypt and Sudan, and rarely heard music from Burundi, Rwanda, Uganda and Kenya.

The project—whose music as been described as vibrant and joyous by media from The New York Times to NPR—performs at 8 p.m. in the Hopkins Center for the Arts’ Spaulding Auditorium on Friday, April 17. At 2 p.m. on the same day, the group performs a shorter, one-hour version of the show for a special family matinee. HopStop audiences also get to hear a version of the show in free performances at 11 a.m. on Saturday, April 18, in Alumni Hall at the Hopkins Center, and at 3 p.m. in the Claremont Savings Bank Community Center in Claremont, N.H.

In performance, the Nile Project is an unprecedented mélange of instruments and styles from throughout the 4,300-mile-long Nile Basin, combining the specific sounds of the Egyptian wooden flute, the oud, African harps, the thumb piano, and other traditional instruments with saxophone, electric guitar, and a pan-African assortment of drums and percussion.

Music is only one part of the week, however. Created by Ethiopian-American singer Meklit Hadero and Egyptian ethnomusicologist Mina Girgis, the project is meant to pave the way, through music, for greater cooperation among Nile nations on critical issues involving the river.

The Nile Project’s Hop residency includes outreach activities to enhance understanding not only of the Nile and its cultures, but also of the Connecticut River. These include a weeklong “watershed camp” for ages 7-16 that will combine music, visual art, science, and outdoor exploration, developed by the Hop, AVA Gallery, and the Upper Valley Land Trust; and a related exhibition, “Water Ways: Tension and Flow,” at the Hood Museum of Art, April 4 through Aug. 23.

The music remains the heart of the project—and organizers took great pains to create a collaborative environment that could succeed in bringing together musicians from wildly divergent musical traditions. To prepare for the U.S. tour, the musicians were brought together in Egypt last November for two weeks of cooperative creation. Before that gathering, however, they all took part in a 10-week online course, created by Nile Project Musical Director Miles Jay, about each other’s musical traditions—delving into the particular scales, rhythms, tonal qualities, and embellishments of each.

“The artists had the time to practice and internalize these musical elements before arriving at the residency, where they were expected to apply these new concepts in their compositions,” says Girgis. “This made a huge difference in the quality of collaborations among the musicians during the residency as they were already fluent with many of each other’s musical backgrounds.”

Master artists and stars in their own countries, they were more than willing to open themselves to new learning, Hadero says. “The more advanced someone is, the more they know what they don’t know. I feel that the spirit of curiosity is really deep with these artists. The more curious you are, the more you listen, the more you can take in what you hear and use it yourself. You’re totally going to school, but you’re also a professor. Everyone is outside their comfort zone. No one is doing what they normally do.”